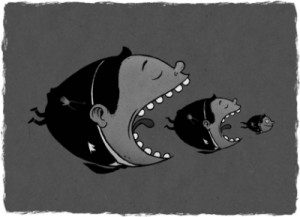 I caught “Capitalism in the Spotlight” on the BBC World Service overnight wherein Justin Rowlett interviewed three pro-capitalist guests in his “In the Balance” series.

It was an interesting, but of course frustrating, program for a Georgist wanting to hear mention of that vast part of economies which is economic rent.

Rowlett tried manfully to put capitalism on the rack. It was generally agreed it needs tweaking because capitalism is now working better in small ways in Africa than in its acknowledged hubs.

I found myself agreeing with one of the guests who suggested maybe the very name “capitalism” needs revisiting. Isn’t capital more of a facilitator in bringing people and the planet together in work?

Which drew me back to my mention yesterday of “free and fair enterprise”.

Capitalism in itself is promoted as “free enterprise”, but even before such obvious failures as we’re currently experiencing in capital markets, we could always ask:  “Free to what extent?”

To which libertarians say you couldn’t expect it to be free given the extent of government intervention (socialism) with which we are forced to contend. Whilst there may be some truth in the statement, it doesn’t really explain these regular financial failures, especially this particular monstrosity.

No, fellas, nor  does monetary system failure cut it – sorry! It, too, is a very secondary consideration to what much of finance is directed – to funding ephemeral (and often bubble-inflated) land prices.

“Free and fair” enterprise would see rent captured (therefore land prices decreased) and taxes abolished, because rent DOES represent what seems so offensive to so many “pure capitalism” types – i.e. that in a well-balanced society there is indeed such a thing as a community interest.

It’s the public capture of rent that makes it fair.

And taxes on incomes? Yes, there’s legalised robbery for you!