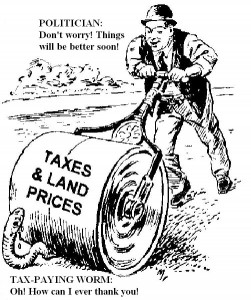 For years I’ve argued that we ensure the phenomenon of recurrent financial and social collapses once we come to believe that taxes are essential to the running of government, that is, once we lose sight of the truism that taxation destroys.

Australia has an incredibly vast bureaucracy (and much of its citizenry) wedded to the gross stupidity that there is some sort of social responsibility to pay taxes, and slowly but surely over the years we have progressed this manner of organised public theft into law.

The periods of social instability and financial collapse we experience every eighteen years or so are neither the fault of capitalism nor of socialism per se, but of a sorely misguided revenue system.

A proper blend of capitalism and socialism is necessary if society is to be resilient and to flourish, but, of course, this observation would be vehemently denied by the Ayn Randian right in the grand polarization that has fractured America and begun to turn up on the political shores of Australia.

Where the right might say “We’re with you about taxes, bro!”, it fails completely to observe that social and financial collapse has been the direct result of the extensive private rent-seeking of publicly generated economic rent by a tiny minority that obscenely enriches itself at enormous cost to the wider community – and the feverish but doomed-to-fail attempts of a far greater part of the population to do likewise – something that should offend both capitalist and socialist alike.

“Economic rent?”, do I hear the left and right inquire? Or maybe, in attempted put-down, “That’s just the late nineteenth century mumbo jumbo of Henry George!” Not so. Classical economists from Adam Smith to John Stuart Mill understood that as land rent is the surplus arising in the production process, it is eminently suited to be the revenue base.

However, those on the right, claiming to be godchildren and inheritors of the wisdom of Smith and Mill, selectively eschew that part of their ideas that as land and resource rents are community-generated they lend themselves admirably to this purpose if we are to shake off the incredibly pathological effects of taxation.

In failing to realise that everyone in the community is entitled to share equally in the economic rent of Australia’s land and resources, we’ve left  it available to be monopolised and plundered by the finance, insurance and real estate (FIRE) sector, nominally a service provider to the more productive side of the economy, but rather parasitically pillaging it.

Other resource monopolisers, such as mining companies, are equally pleased that land and natural resource rents are in most Australians’ blind spot. That’s how our mining billionaires, armed with $22 million dollars in advertising, were able to convince us we had no right to Kevin Rudd’s proposed 40% partnership rental on their net profits.

A rampant FIRE sector has rapidly turned western capitalism into a caricature. As the private capture of land and resource rents has been elevated to the position of an end in itself, tax levels have increased, land prices have inflated into impossible bubbles, and production has begun to wilt, or forced to go offshore. Unemployment will follow, now that the real estate bubble is bursting.

It’s not just the right that’s misguided in allowing the private capture of land and resource rent. The left has little or no idea of its sufficiency, not only to replace all taxation, but additionally to provide such a substantial dividend to all Australians that pensions of every description could be readily abolished, along with a second bureaucracy that could easily re-employ itself in a healed and proactive economy.

In fact, it seems that Russian and Chinese communism graduated from Marx without having ever having read him thoroughly, because Karl Marx did finally espy the singular nature of the rent surplus in Book 3.

So, with both the right and left in political denial about land and resource rents, and the communist system having disintegrated, let me put the proposition that capitalism urgently needs to rediscover it, or we will otherwise be consigned to languish in the same deep torpor and economic malaise that has characterised Japan over the last twenty years.

Worse, when they can’t exit the economic depression, western leaders will no doubt look to manufacture a war with China. Whilst the precise nature of the heroic cause that will send us to war is unknown, let’s remember that when we were called to WWs I and II to liberate nations, in the end both were born of the absolute frustration with the stagnation that followed on the heels of economic depressions.  And of course a ‘good’ war is always a solution, isn’t it?

So, here’s an idea. What if we allow enterprise to be truly free, free from all arbitrarily imposed taxation, and to socialise only society’s surplus, the people’s rent?

THE STUMBLING BLOCK – THE POLITICAL PARTIES

However, it is insufficient to achieve change simply by educating Australians to the manner in which the FIRE sector and mining industry have been ripping us off for years per medium of a tax regime that fines productivity, effort and thrift and rewards parasitic rent-seekers.

Like the USA, Australia is riven by a party political system. Once divided in this manner, it becomes a cinch for rentier plutocrats to quietly run the show from the shadows. They’ll give generously to the parties, provided they don’t interfere with their free ride.

Thus was Barack Obama castrated by a generous Wall Street. Thus was Kevin Rudd set aside as Prime Minister of Australia for daring to challenge billionaire mining magnates.

So, even if Julia Gillard and Tony Abbott were educated to see the people’s rent is 50% of the Australian economy, both are likely to keep pumping up land price bubbles and kow-towing to billionaire holders of mining licences. The plutocracy is now too powerful for our politicians; they are no longer in control, no longer our representatives.

Change is unlikely to come from baby boomers, stuck in their ways, and clinging to one or other of the parties. It’s also probably too late for it to come from many Generation Xers.

No, the hope of the side is Gen Y.  It has been cynically locked out of affordable access to housing by governments feeding the land price escalation with first home buyers’ (sic) grants, and a tax system that fosters real estate rorts.

Where the oldies say Gen Y want what they haven’t earned, I see things quite differently.  I’ve seen their high mindedness, enthusiasm and reasoned comments regarding Prosper Australia’s call for a residential buyers’ strike. They’ve seen and understood a perverse tax system’s complicity, and the shrug of shoulders from their political ‘representatives’. They want change.

Many of them have the indelible imprint on their minds of a system that completely sidelined them as young adults or condemned their brothers and sisters to decades of servicing impossible mortgages.

It is they who will bring about this most necessary of all political reforms.

6 thoughts on “RENT REVENUE FOR A FREE AND RESILIENT SOCIETY”