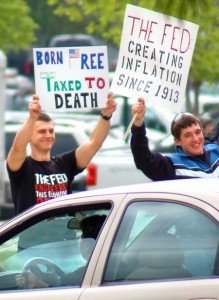 As the negative fallout deepens from the government roof batts and solar panels stimulus saga, the question becomes whether Peter Garrett will survive as Minister for the Environment, Heritage and the Arts.  It seems to confirm that  governments are pretty useless in areas other than defence, law and order and public infrastructure.

What about education, health and social welfare, do I hear you ask? I’d suggest that governments have been drawn into these areas simply as a safety net from the pathologies that will always flow from aberrant taxation.  Think about it.  May not the fact that government has been drawn into the business of education, health and social welfare signify that too many people have paid too many taxes  over three levels of government for too long in Australia, and that this acts to destroy many other possibilities and opportunities?

John McRobert has made a great contribution in educating Australians to the devastation taxes wreak upon the Australian economy.  While his suggestion of a 2% tax on spending in Online Opinion yesterday would be a vast improvement on what we have today, I was inclined to respond:

“John McRobert has long displayed an excellent understanding of the vast damage wrought upon the Australian economy by an incredibly perverse taxation ‘system’. The role of taxation on industry and thrift in delivering the world into the GFC is undoubted.

However, I am less seized by his spending tax to replace the multitude of taxes with which we’ve been shackled. How would this deal with the undergound cash economy – or with barter? Also, although John’s proposal is infinitely superior to what we have now, a tax on spending will still tend to inhibit spending to some small extent.

Nor is his spending tax likely to curb property bubbles which is clearly the other half of the reason we’re having this GFC. A tax on land values would do all John McRobert is seeking and then some. It also addresses housing unaffordabilty for this and future generations of Australians by putting paid to the property speculation industry.”

I’ve showed here and here that real wages increases actually topped out at the outset of the 1970s, at the peak of the Kondratieff Wave, and have consequently headed downward into the current depressionary K-wave trough.

Had we drawn more revenues from land immediately post WWII, and less from production and industry, the real wage increases and prosperity up to 1972 would have been even greater.  And had we captured only half our land rent since 1972, my report “Unlocking the Riches of Oz” demonstrates that Australia’s GDP would now be more than $2 trillion per annum (double what it is today).

When we come to see political parties, government and the FIRE sector for what they are, the primary ingredients of the GFC, then we might be able to remedy it; but not before.

In the meantime, governments of all persuasions will continue ‘stimulating’ economies, bailing out banks and real estate markets while, as it’s being done in the eye, an ill-informed public clings in misguided hope to one or other of the impotent political parties for a salvation that aint going to come.

The best stimulus any government can apply right now is to abolish taxes and capture its land rent.  It’s revolutionary, but it works. Unfortunately, neither the Right nor the Left accept this solution, because it’s only the Georgist school of economics that advocates it.  Interesting that it was predominantly Georgist economists who called the GFC.  Maybe they’ve studied and learnt the lessons of history better?