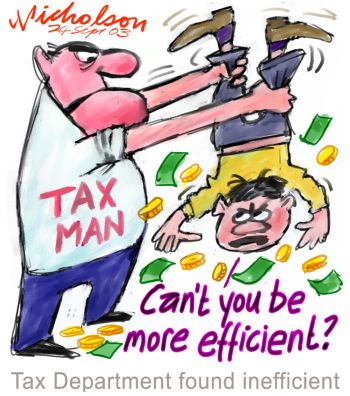 As if to underscore why income tax must be abolished, Australians now learn the tax man’s been given the power to break into your home. People once resisted taxes upon their earnings, equating it to theft, but we’ve long surrendered the point to powerful interests and errant policy makers.

Income tax was introduced in the United States as a temporary WWI measure.  Similarly, the Commonwealth of Australia assumed the power from the states in WWII.  But, like geese, we’ve come to accept that being taxed on our income is as natural as night and day. Forget the fundamentally intrusive nature of income taxes, we’ve got to get revenue from somewhere, and politicians have come to see the incredible income tax bureaucracy as a great source of non-productive employment – a bit like the FIRE sector – and it doesn’t offend the wealthy.

For those with smart lawyers and accountants, income taxes remain relatively easy for the wealthy to avoid and evade. Fred Harrison’s excellent book, “Ricardo’s Law – House Prices and the Great Tax Clawback Scam” provides insight into how the wealthy claw back every cent they’ve ever paid in income taxes, and then some, through increases in the land value of their real estate holdings.  It goes unremarked that this privilege is unavailable to renters and those whose only real estate asset is their home.

The privacy intrusion and unfairness accompanying income taxes are, of course, done away with when revenues are drawn mainly from publicly created land values. But land-based revenue remains low on purpose – so as not to threaten the same power and privilege that has been permitted to widen the rich-poor gap and deliver us the GFC.

C’mon, off those sofas and back onto your hind legs, people!