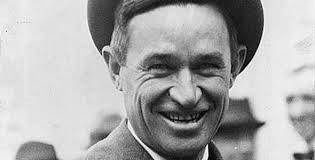 Take a look at these!

Will Rogers on Banking and Wall Street

“I guess there is no two races of people in worse repute with everybody than the international bankers, and the folks that put all those pins in new shirts.” Aug. 26, 1932

“The bankers just got a good cussing by everybody for loaning too much money. Well, they got some awful nice buildings. So when a banker fails, he fails in splendour.” Daily Telegram (DT) #2345, Feb. 7, 1934

“If a bank fails in China, they behead the men at the top of it that was responsible…If we beheaded all of ours that were responsible for bank failures, we wouldn’t have enough people left to bury the heads.” Feb. 6, 1927

“You can’t break a man that don’t borrow; he may not have anything, but Boy! he can look the World in the face and say, “I don’t owe you Birds a nickel.” You will say, (if everyone stops borrowing) what will all the Bankers do? I don’t care what they do. Let ’em go to work, if there is any job any of them could earn a living at. Banking and After-Dinner Speaking are two of the most Non-essential industries we have in this country. I am ready to reform if they are.” WA #14, March 18, 1923

[In a speech to the American Bankers Association convention in New York City!] “You have a wonderful organization. I understand you have ten thousand here. And if you count the ones in the various federal prisons, it brings your total membership up to around thirty thousand.” 1923

“Bankers are likeable rascals. Now that we are all wise to ’em, it’s been shown that they don’t know any more about finances than the rest of us know about our businesses, which has proved to be nothing.” DT #1924, Oct. 4, 1932

“But we can’t alibi all our ills by just knocking the old banker. First he loaned the money, then the people all at once wanted it back, and he didn’t have it. Now he’s got it again, and is afraid to loan it, so the poor devil don’t know what to do.” DT #1833, June 8, 1932

“We never will have any prosperity that is free from speculation till we pass a law that every time a broker or person sells something, he has got to have it sitting there in a bucket, or a bag, or a jug, or a cage, or a rat trap, or something, depending on what it is he is selling. We are continually buying something that we never get from a man that never had it.” DT #1301, Sept. 24, 1930

“Just been talking today out here to all the Senators investigating these stock swindles and overcapitalizations. There has been hundreds of millions lost. There ought to be some form of guardianship for people that buy all this junk. Education won’t do it. (The buyers are) the ones we have educated up till they are just smart enough to fall for everything that comes along.” DT #2270, Nov. 12, 1933

“The whole financial structure of Wall Street seems to have fallen on the mere fact that the Federal Reserve Bank raised the amount of interest from 5 to 6 per cent. Any business that can’t survive a 1 per cent raise must be skating on mighty thin ice… But let Wall Street have a nightmare and the whole country has to help get them back in bed again.” DT #950, Aug. 12, 1929

“I am not against (bull fighting). Every nation has their own affairs and own sports. Some nations like to see blood, and some like to see their victims suffer from speculation. It’s all in your point of view. They kill the bull very quick. Wall Street lets you live and suffer.” DT #1646, Nov. 1, 1931

“Borrowing money on what’s called ‘easy terms,’ is a one-way ticket to the Poor House. If you think it ain’t a Sucker Game, why is your Banker the richest man in your Town? Why is your Bank the biggest and finest building in your Town? Instead of passing Bills to make borrowing easy, if Congress had passed a Bill that no Person could borrow a cent of Money from any other person, they would have gone down in History as committing the greatest bit of Legislation in the World.” WA #14, March 18, 1923

“Why don’t somebody print the truth about our present economic situation? We spent six years of wild buying on credit — everything under the sun, whether we needed it or not — and now we are having to pay for ’em, and we are howling like a pet coon. This would be a great world to dance in if we didn’t have to pay the fiddler.” DT #1224, June 27, 1930

(On spending money) “We have been just going like a house afire, and we couldn’t see any reason why we shouldn’t keep right on burning. Our tastes were acquired on credit, and we wanted to keep on enjoying ’em on credit.

It wasn’t what we needed then that was hurting us, it was what we was paying for that we had already used up. The country was just buying gasoline for a leaky tank. Everything was going into a gopher hole and you couldn’t see where you was going to get any of it back.

You see in the old days there was mighty few things bought on credit. Your taste had to be in harmony with your income, for it had never been any other way. I think buying autos on credit has driven more folks to (rob banks) as a regular means of livelihood than any other contributing cause… I don’t reckon there has ever been a time in American homes when there was as much junk in ’em as there is today. Even our own old shack has got more junk in it that has never been used, or looked at than a storage place. Most everybody has got more than they used to have, but they haven’t got as much as they thought they ought to have. So it’s all a disappointment more than a catastrophe. If we could just call back the last two or three years and do our buying a little more carefully why we would be O.K.” WA #419, January 4, 1931

“Politics are receiving a lot of attention because we have nothing else to interest us. No nation in the history of the world was ever sitting as pretty. If we want anything, all we have to do is go and buy it on credit. So that leaves us without any economic problem whatever, except perhaps someday to have to pay for them. But we are certainly not thinking about that this early.” DT #660, Sept. 6, 1928

“See where Congress passed a two Billion dollar bill to relieve bankers’ mistakes. You can always count on us helping those who have lost part of their fortune, but our whole history records nary a case where the loan was for the man who had absolutely nothing.” DT #1715, Jan. 22, 1932

Now I am not unpatriotic, and I want to do my bit, so I hereby offer my services to my President, my country and my friends to do anything, outside of serving on a commission, that I can in this great movement. But you will have to give me some idea of where “confidence” is. And just who you want it restored to.” DT #1035, Nov. 19, 1929

“I have been trying my best to help (the President) and Wall Street “Restore Confidence.” Confidence, is one of the hardest things in the World to get restored once it gets out of bounds. I have helped restore a lot of things in my time, such as cattle back to the home range. Helped to revive interest in National Political Conventions. Even assisted the Democrats in every forlorn pilgrimage, and a host of other worthy charities. But I tell you this “Restoring Confidence” is the toughest drive I ever assisted in. When I took up the work two or three weeks ago, confidence was at a mighty low ebb. Wall Street had gone into one tail spin after another…

I am telling (folks) that the Country as a whole is “Sound,” and that all those who’s heads are solid are bound to get back into the market again. I tell ’em that this Country is bigger than Wall Street, and if they don’t believe it, I show ’em the map.” WA #362, Dec.1, 1929

“When Wall Street took that tail spin, you had to stand in line to get a window to jump out of, and speculators were selling space for bodies in the East River… You know there is nothing that hollers as quick and as loud as a gambler.” DT#1013, Oct. 24, 1929

“Sure must be a great consolation to the poor people who lost their stock in the late crash to know that it has fallen in the hands of Mr. Rockefeller, who will take care of it and see that it has a good home and never be allowed to wander around unprotected again. There is one rule that works in every calamity. Be it pestilence, war or famine, the rich get richer and the poor get poorer. The poor even help arrange it.” DT #1019, Oct. 31, 1929

“Our whole Depression was brought on by gambling, not in the stock market alone but in expanding and borrowing and going in debt, all just to make some money quick.” Radio, May 5, 1935

“Candidates have been telling you that if elected they would ‘pull you from this bog hole of financial misery.’ Now is a good chance to get even with ’em, by electing ’em, just to prove what a liar they are.” DT #1334, Nov.2, 1930

“Wall Street is being investigated, but they are not asleep while it’s being done. You see where the Senate took that tax off the sales of stocks, didn’t you? Saved ’em $48,000,000. Now, why don’t somebody investigate the Senate and see who got to them to get that tax removed? That would be a real investigation.” DT #1803, May 4, 1932

“There is two things that can disrupt business in this country. One is war and the other is a meeting of the Federal Reserve (Board).” DT #837, April 2, 1929