The Property Council of Australia has produced a report Supercharging the Victorian Economy which obviously doesn’t want property investors to pay their fair share of the uplift in values new infrastructure provides.  They prefer instead:-

Melbourne’s freeway network should be converted to toll roads, leased out to private operators and subjected to peak-hour pricing as part of a series of reforms proposed to tackle congestion, build new infrastructure and make the most of what we have.

Yep, that’s “supercharging” alright! [Don’t you love the dramatic irony?] Surely this is nothing but an extension of the “user pays” model, the inspiration of Ayn Rand, Ronald Reagan, Margaret Thatcher at al which has delivered nations to the point where economies are collapsing about our ears? (“Move along people! No such thing as community interest here, folks !”)

Spokesperson for the Property Council of Australia, Jennifer Cunic, interviewed about the report by Ross Stevenson and John Burns on 3AW’s breakfast program this morning didn’t give an inch. The absence of land value capture in the Property Council’s proposals was palpable.

Ross and John then proceeded to conduct a survey showing 81% of people to be against further toll roads and 19% in favour, but you’d have to admit such self-serving reports in favour of big real estate interests have had a habit of getting up as policy.* Beware, be very aware. Let’s hope we can make the transition from the niggardly “user pays” to land value capture, where the beneficiary pays, because there is a community interest here guys – and it’s represented by unprivatising community-generated land rent. 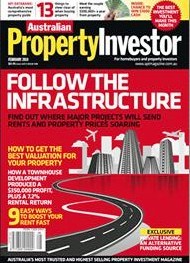 * STOP PRESS: How prophetic!  It did turn up as policy in Victorian Treasurer O’Brien’s budget later today. The East-West tunnel link is to be commenced and developed as a Private-Public Partnership (PPP) venture, despite these starting to fail around the country. [Sigh!]

While we’re talking about fairness, I guess this is OK because they work so hard?