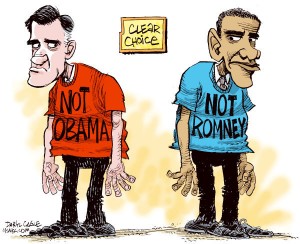 It’s clear there’s no such thing as bringing an open mind to address US foreign policy.  That’s seen as a weakness.  It’s largely about bluff,  and sabre-rattling bravado.

Mitt Romney knows this and exploited it to Barack Obama’s disadvantage in the meantime.

The President has got the message, but lost a few points on the issue .

On economic matters, Romney came across well, but he has the US depression on his side because, like Australians, the American swinging voter is greatly influenced by how he or she is travelling financially.

However, although it’s not usual for an incumbent President to be thrown out of office after his first term, the upcoming election is likely to be a close one – because the economy will be the main issue with the people.  I’ve taken the time whilst  in the US to speak to people, and the economy certainly comes out as THE issue.

Tragically, although both candidates for the leadership of the world’s greatest economy know a healthy real estate market is essential to running the show, neither understands how to bring this about.

The purpose of this site, of course, is to attest to the fact there’s only one way to create a genuine free market in real estate.

The long term economic outlook for the US, and the world therefore remains bleak – bleak in the extreme – whoever wins the November election.