It gets very lonely sitting here and having the only remedy capable of repairing world economies overnight.  And it’s just a simple fiscal adjustment.

Meanwhile, TV and newspapers cover the global financial crisis relentlessly, running hither and yon for answers from the same clueless or corrupt individuals who couldn’t see the collapse coming from a long way off in the first instance.

Even the BBC and the ABC, who thinking people believe are capable of investigating fresh ideas in an unjaundiced fashion – no, they too are held hypnotically in the thrall of the modern economist.  It’s absolutely incredible!

I’m not big-headed enough to suggest I’m the only person with the antidote to all the financial turpitude and madness surrounding us. Henry Georgists have had it in their hands for 133 years now.

You see, Georgists are the only real experts in how to exit from economic depressions.  They’ve read and understood (that part’s critical: they understood, ‘saw the cat’) Progress and Poverty, the sub-title of which is (wait for it!….) — An inquiry into the cause of industrial depressions and of increase of want with increase of wealth … The Remedy.  The sub-title says it all!

And it aint just words.  The ideas work!  But the high priests with their hands on the levers of economies like to say a 133 year-old remedy–it’s actually millennia old!–can’t possibly work in the 21st century.

They’re wrong, of course, but they have to say that because they don’t want to offend the 0.1% who steal the greater part of our common wealth, our land and natural resource rents.  That’s what’s made them billionaires in the first place, and they’re not handing over their super-profits, our rents, to anyone!

And the modern economist toes their line.  That’s what neo-classical economics is all about: keeping sweet with the 0.1%, the rent-seeking parasites.

And our economic high priests also lie.  They say that land rent is only 1-2% of the economy, so it’s pretty pointless trying to capture that for public revenue when it needs to be around 30% of the economy, they assert.

I created a chart based upon the work of Dr Terry Dwyer, who actually bothered to do the work on land rent (instead of simply dreaming up an extremely low figure), which shows 1-2% to be nonsense.  It’s actually 32.5%.

If you add other natural resource rents, such as mineral rents, fishing, forestry and spectrum licenses to the rent of land, you’re looking at more than 40% of the economy–the common wealth–being creamed off, largely by super-wealthy parasites, the 0.1%.

Ken Henry became alert to this fact in his world-leading inquiry into the Australian taxation system.  His panel concluded Australia needs to abolish over 100 damaging taxes and use only four taxes as the revenue base: income tax, the GST, a land tax and a mining tax at the rate of 40% of net profits (i.e. the super-profit, or mineral rent).

So far, politicians and economists have assiduously avoided the land tax recommendation and severely reduced the mining tax. They’re now dutifully concentrating mainly on increasing the GST – because it’s easier on their bosses, the 0.1%.

We must NOT interfere with these parasites!  “That’s class warfare!”  The rents are theirs and must remain theirs!  Harumph! Common wealth, indeed!  🙁

The Gonski Report on education must be funded by increasing the GST, or taxes on labour and capital, as usual, they say: same for infrastructure, health, defence, social welfare.  Don’t look in our direction, at our natural resource rents.

Yes.  Don’t DARE look at that 40% of the economy currently stolen by the leeches, the 0.1%!  Let them remain invisible to everyone, and let us continue to wonder how we’re to fund a workable economy.

The Deputy Prime Minister of the UK, and leader of the Liberal-Democrats Nick Clegg, had the temerity to sing the advantages of a land value tax on the weekend.  And didn’t the 0.1%, including Prime Minister David Cameron come down on him like a ton of bricks!

Let’s just sit in the corner together here singing the Liberal-Dems anthem, shall we, Nick? 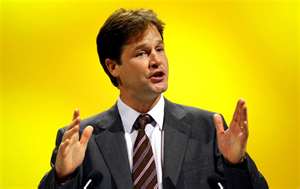 Sound the call for freedom boys, and sound it far and wide,
March along to victory, for God is on our side,
While the voice of nature thunders o’er the rising tide:
“God gave the land to the people.”

Hark! The sound is spreading from the east and from the west!
Why should we work hard and let the landlords take the best?
Make them pay their taxes on the land just like the rest!
The land was meant for the people.

Clear the way for liberty, the land must all be free,
None of us shall falter from the fight tho’ stern shall be.
‘Til the flag we love so well shall fly from sea to sea,
O’er the land that is free for the people.

The army now is marching on, the battle to begin,
The standard now is raised on high to face the battle din,
We’ll never cease from fighting ’til the victory we win,
And the land is free for the people.