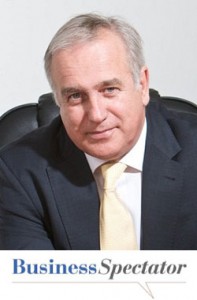 A great piece from Alan Kohler in today’s Business Spectator.

Love some of those colorful lines, Alan!

Too fat to fail

The problem with depressions, not that I’ve ever been awake during one before, is that you tend to get caught up in the minutiae of the moment – the gripping Libor-rigging scandal, the latest writhe in the agony of Europe, the latest twitch in the US economy.

We rush from scandal to crisis clamouring for each to be punished or redeemed. But interesting as all this is, it distracts from the big picture, the real story, which is that the world has begun an epic, long-term balance sheet adjustment.

Because most western governments are insolvent, fiscal policy is dead. They maxed out their taxing power a long time ago and have been borrowing ever since. When it comes to the economy, governments are a spent force.

This has put central banks in charge, and they basically do one thing only: print money. If all you have is hammer, everything looks like a nail, so central banks naturally think the world’s problem is a lack of money, which they are busily solving.

The problem is a lack of money is not the problem, it’s solvency, and part of the reason for that is too much money, or rather too much credit.

Debt was built up through 30 years of current account imbalances after currencies were finally unshackled from the gold standard in 1971, and the depression of the 70s came to end in 1982.

Central banks, principally the Federal Reserve, complied in the process of debt build-up by holding down interest rates and allowing asset prices to rise, keeping balance sheets in the black.

The credit crisis of 2007-08 brought asset prices down rapidly and rendered banks suddenly insolvent, so they had to be recapitalised by governments. Now the governments of Europe, the US and Japan are insolvent and the only question is when the central banks will monetise their debt – that is, print more money and buy their debts.

Governments and banks, lashed together like cage fighters, have to shrink drastically to reflect the new reality of their balance sheets, but no one wants to shrink and they are fighting that like polecats at the same time as fighting each other.

Rigging Libor, the benchmark interest rate for most global lending, and which is bound to extend far beyond Barclays, was one way the banks attempted to avoid their fate.

As a result of the 30-year boom in their product (credit), banks became too big and, more importantly, came to believe their own bullshit. Bankers became so rich, they naturally felt this was due to their brilliance, so that when the magic stopped working in 2007 they felt no compunction in bending the rules. They were, after all, Masters of the Universe.

The financial industry must now shrink and learn humility. To use investment parlance, the world is overweight banking and it needs to return to the simple task of collecting savings and distributing them to those who require them.

Governments also grew too big and acquired too much self-belief as a result of easy debt. Budget deficits and current account deficits were easily financed by future generations and they are now asking for the money back.

As a result short-term government bailouts in Europe are getting shorter and shorter, and less worthwhile. Greece is in worse shape now than it was before being bailed out. Spain and Italy are heading down the same path.

The governments of Japan and the United States are both insolvent – that is, their debts are greater than they can service for long. There is no alternative than deflation, although they will probably try inflation first – that is, monetising the debt.

But the greatest danger for investors is to not recognise the deflationary forest because you’re too busy watching the trees.

That doesn’t necessarily mean not investing, although for some wary souls it does, but rather it means understanding that we’re in a long bear market that is now five years old and could have 10 years to run, as banks, governments and households go about shrinking their debts to better reflect their assets and income.

Bear markets like this cause heartbreak, but they also create wonderful opportunities.