Many attempts to analyse the cause of the GFC contain more than a grain of truth. The vast majority, however, provide no useful hint to a remedy. As the process is structural and extremely repetitive, a cure needs to be found.

Banks did, indeed, extend excessive credit for the purchase of residential real estate without due regard for the bubble developing in the background. Where was their credit management during this time?

Whether the failure of banks merits bailouts from public funds warrants far greater debate than has occurred internationally.

Who makes the decisions that people have to be further fleeced in order to retain public trust and confidence in an errant banking system? Would not private takeovers following due diligence investigation be more orderly and appropriate? Why exactly are banks different when they fail?

And, yes, the world’s reserve banks were also at fault in their poor monitoring of bank exposure to the gigantic bubble in land prices.

When Federal Reserve governor Edward M Gramlich urged examiners to investigate mortgage lending in 2000, it was Alan Greenspan chairman of the Fed who personally intervened to thwart the initiative. In 2001 US Treasury official Sheila C Bair met with the same lack of success in having subprime lenders either adopt, or adhere to, a code of best practice.

But the failure of banks and their overseers simply aided a pathological process that was long before underway. It remains largely unrecognised and is based upon mistruths about revenue sources.

In days of yore we captured a far greater proportion of the economic rent of land for revenue, whether in the fifteenth century and first quarter of the sixteenth (when the English labourer with a family of five still retained two-thirds of his wage after food clothing and rent) or before the US turned to income tax as a ‘temporary’ measure at WWI. (It was not until WWII that the Australian federal government also assumed the income taxing power from the states.)

In Unlocking the Riches of Oz: A case study of the social and economic costs of real estate bubbles 1972 to 2006, I mentioned the more recent decline of property-based revenues as a proportion of all taxation. It became a worldwide fashion arising from mistruths about land ‘taxes’ (more correctly called the economic rent of land).

The Henry Review of Australia’s taxation system certainly did not capture the public’s imagination when it was released in May of 2010.  Its recommendation to establish an all-in federal land tax to replace poorly-applied state land taxes was greeted with dismay in some quarters, not the least of them politicians in the major parties—and even from the public, notwithstanding recommendation also to abolish a vast number of less-efficient taxes.

Public distrust of land-based revenues underestimates their advantages and has been carefully founded upon two misrepresentations which would do Joseph Goebbels proud:

The first of these two charges emanates from the property industry and a print media beholden to real estate advertising.  Accordingly, it is undeniable that articles warning of the likely outcome of the giant real estate bubble we experienced from the outset of the new century were subordinated to soothing pieces about the benefits of home ownership: also advice to young couples and investors that they might miss out if they didn’t get into the market right now.

The few articles pointing to the existence of a bubble that did make it through were often subject of ‘concern’ by real estate industry leaders. These worthies have not been noted for ever having called a real estate bubble before it burst.

The press and mainstream media in general have accordingly aided and abetted the idea that the right to real estate should come with no greater strings than local council rates.

In the latter connection I’m reminded of my late father-in-law who, more often than not, used to trot down to the municipal offices to complain about his rates. When council justified its valuations, he’d occasionally take the discussion of how he was paying too much up with me. “Did you ever go into the ATO to complain about the far greater amounts of income tax you used to pay?” I once inquired of him. “Don’t be stupid. You can’t do that”, he exploded.

On the other hand, fortunately most of the textbooks in economics do show land-based revenues to be the fairest revenue base. This is because it can be shown they are not arbitrary taxes, they are technically rents in nature and can’t therefore be passed on in prices like other taxes.

John Locke (1632 – 1704) wisely said “It is in vain in a country whose great fund is land to hope to lay the publik charge on anything else; there at last it will terminate.”

Today, we ignore this injunction to our great social and economic distress.  The deadweight of taxation cascades everywhere throughout our prices and via an incredibly cumbersome tax administration, sending prices soaring and making manufacturing uncompetitive overseas.  It is all this deadweight, not simply our labour costs as claimed render us uncompetitive.

In Roosevelt Institute Working Paper No. 6, ‘Principles and Guidelines for Deficit Reduction’, Joseph Stiglitz concludes: “One of the general principles of taxation is that one should tax factors that are inelastic in supply, since there are no adverse supply side effects. Land does not disappear when it is taxed. Henry George, a great progressive of the late nineteenth century, argued, partly on this basis, for a land tax. It is ironic that rather than following this dictum, the United States has been doing just the opposite through its preferential treatment of capital gains.

But it is not just land that faces a low elasticity of supply. It is the case for other depletable natural resources. Subsidies might encourage the early discovery of some resource, but it does not increase the supply of the resource; that is largely a matter of nature. That is why it also makes sense, from an efficiency point of view, to tax natural resource rents at as close to 100% as possible.”

Having demolished the claim of the real estate lobby concerning inefficiency and ineffectiveness of a land tax, neo-classical economics circulates a canard of its very own:-

These claims are made to look silly by Mason Gaffney, Professor of Economics at the University of California (Riverside) who actually bothers to do the required research in The Hidden Taxable Capacity of Land” [The International Journal of Social Economics, 36(4)], instead of plucking patently false figures out of the air.

Land rent only four percent of the economy?  Less than one percent?  Bah, humbug! Try thirty percent plus!

In the face of facts, the evidence that the GFC is the inevitable outcome of a pathological tax system fining labour and business whilst encouraging real estate bubbles becomes compelling.

The diagram below assists to explain the process: effective demand is being choked off by the wedge driven into GDP by increasing shares to taxation and private rent seeking which diminishes the returns to labour and capital.

The analysis is entirely consistent with the conclusions of The Henry Review. 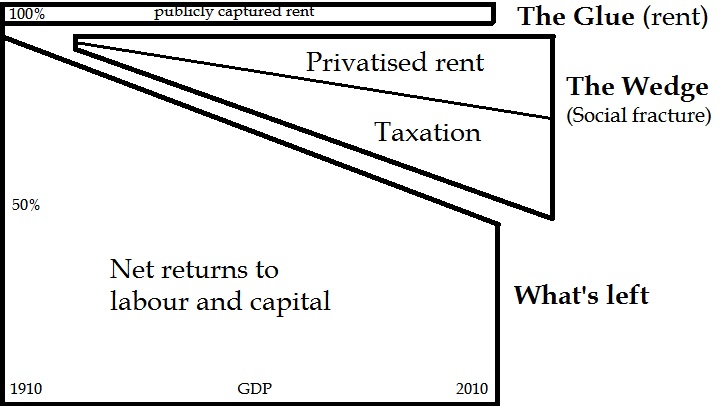 4 thoughts on “Global financial collapse – what’s happening to us?”