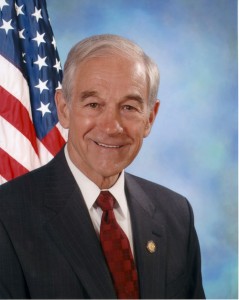 Absent anyone who’s seen the cat, I’d like to see Ron Paul get up as leader of the Republicans.

That’s because he’d put the wind up the military and up munitions manufacture, arguably one of the few remaining great US industrial successes these days.

And that’s the main reason Ron Paul won’t make it.

Many Americans are only too aware of how success and leadership is beginning to wane in the world’s greatest democracy, and it will be possible for his competitors to generate enough irrational fear that having Ron Paul as leader of the Republican Party equates to the US losing its military supremacy.

Like all disciples of Von Mises, Rothbard, et al, Ron Paul is unfortunately more concerned with money, exchange and the determination of prices than with the laws of production and distribution of wealth which supporters of Henry George know take precedence over money, credit and prices.

Paul’s near-coherent economic policy is better than that of his opponents though, but like Austrian economics in general, it suffers the fatal flaw of not being able to distinguish land from capital. Conflating them won’t allow the distinction that needs to be drawn between earned and unearned incomes to defeat the depression.

But you do have to give Paul credit for the accuracy of his forecasts. They’re almost as good as Georgists such as Fred Harrison, Michael Hudson, Fred Foldvary and myself. (He, like the few non-Georgists who managed to forecast this financial and social collapse, uses credit as a proxy for speculation in land prices.)