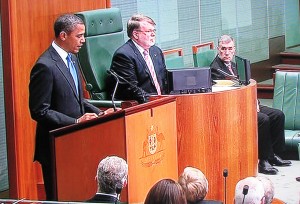 “Prime Minister, Julia Gillard, men and women of Australia: the United States of America realizes it has pandered to the one per cent by allowing this minority to privatize the economic rents of its people.

As a result, the United States government, too, is in debt to the tune of $15 trillion dollars.

Therefore, to address this untenable situation and remove the 99% from the deep abyss into which it has been consigned, the US will, as of the next session of Congress, move to un-tax labor and capital.

Thank you.  Having thus freed up the machinery of free enterprise, which had become so hopelessly shackled by the excesses of arbitrarily-applied taxes,  we’ll come to  see in the clear light of day that we created a false god of financial rent-seeking and excess. 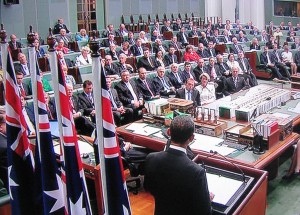 USA will now revert to deriving its revenues from the publicly-generated economic rents of its land and natural resources – as once it did.

I am supremely confident that this essential initiative—which will almost certainly be followed by the economies of the world when they witness the positive results of this action—will herald the introduction of a new golden age of freedom and prosperity for everyone.

[Relieved from their own guilt, the combined sitting of the lower and upper houses of Australia rises to its feet in prolongued clapping and cheering]