The only doubt that Australian real estate prices are in a bubble of gargantuan proportions resides in the minds of analysts such as former Treasury employees Paul Bloxham, Christopher Joye and their wishful adherents.

By publishing their highly contrived bubble denials, newspapers ingratiate themselves with their real estate advertisers and spruikers for the industry, thereby obscuring the overwhelming truth about the real estate bubble. It is relegated to the occasional article by Steve Keen, Gerard Minack, Gavin Putland or myself, or a rare IMF release.

The latter, though, are usually accompanied by a put-down from a disciple of the Bloxham-Joye school not noted for having found anything wrong with skyrocketing land prices other than an imaginary “shortage of supply”.

No guys: shortage of supply doesn’t cut it. Nor did it cut it in California.  Er, how about an errant tax system that gives all the wrong signals ….?

It’s most heartening therefore to see the great number of thoughtful people not sold on the “all’s well” line the media has constructed for them now having their own say in Prosper Australia’s call for a residential buyers’ strike as taken up by the social reform group GetUp.

It might assist discussion for me to provide an interim update of the Kavanagh-Putland Index. This is in two parts, showing 1) total real estate sale prices for Australia divided by GDP, and 2) real estate volatility as a driver of the economy’s direction.

I should emphasise that the broken lines for the current year represent incomplete figures. Although they are extrapolations based upon 2011 real estate sales data from South Australian and Western Australian government departments, I consider figures to come from the other states and territories will eventually confirm these dotted lines.

(A)        The 18 per cent bubble line is simply empirical.  (With the exception of the last of the banks’ 1994 distressed sales sell-off in other states, and the contemporaneous boom in Queensland, any time the ratio has surpassed 18 per cent Australia has experienced a recession. The better guide, though, is the ‘volatility’ chart.)

(C)        A significant economic recession has been indicated when aggregate sales prices decline by 20%. 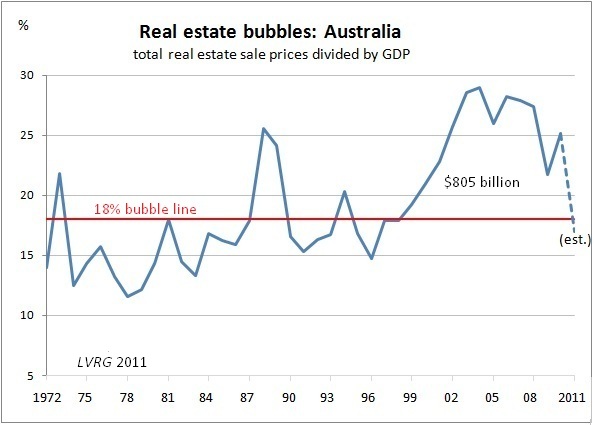 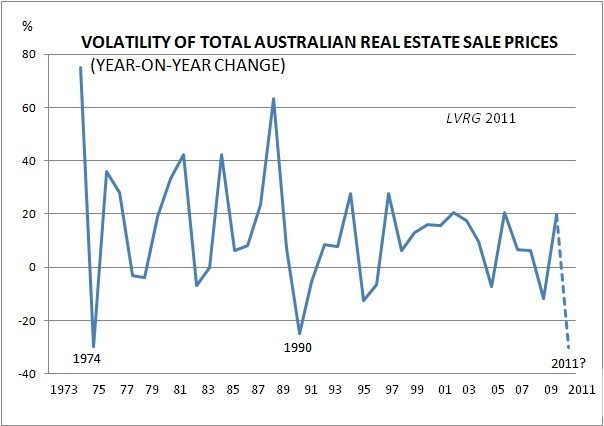 5 thoughts on “KAVANAGH-PUTLAND INDEX: AN UPDATE”