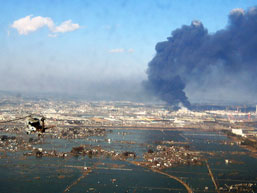 Events issuing from the Japanese earthquake have taken the ongoing economic collapse of  The United States, Portugal, Greece, Ireland, Italy, Spain and other world economies off newspapers’ front pages.

Live on TV we witnessed yet another natural disaster, this time an earthquake, its after-shocks, and several tsunami waves hammering Japan. The horror of loss of life and destruction transfixed us as people, sometimes in vain, attempted to flee the terror of the tsunami in their vehicles.

We pray the attendant man-made accidents, failing nuclear power plants, may be cooled and remedied without further loss of life.

This tragedy, overlaid on top of Japan’s failing economic performance over twenty years seems to pose insuperable hurdles with which she has to deal.

A GLIMMER OF LIGHT?

So, where’s the good news?

As he travels in New York’s subway, it’s nice to see Irishman David McWilliams recounting a heartening story. He relates the successful turnaround in the fortunes of the New York subway to the approach Ireland must take with its billowing debt.

One hopes Ireland’s new Taoiseach, Enda Kenny, has the wit to see that the Irish want change – and McWilliams’ formula to initiate that change is quite correct.