TUMULT IN TUNISIA AND EGYPT FITS THE EXPLANATION I’VE GIVEN

Make no mistake about what’s now happening in Tunisia and Egypt. It is similar to the European protests that have taken place in Greece and Spain. It’s all to do with a concoction in the distribution of wealth.

Egypt’s well educated younger people are finding they’ve no jobs to go to. What is the purpose of education if the economic system is foundering and employment can’t be found? Where has the economy gone wrong and why are wages so low, anyway?

These are fair questions, and will increasingly be asked in places around the world where the privileged few continue to steal economic opportunity from others.

Americans and Australians may be expected to be late in taking to the streets. Most are in deep distraction, having entertained themselves to a standstill, certainly into a stunned silence on any consideration of the vast gap between themselves and the privileged few. They have their iPhone and Facebook and all’s right with the world.

But governments have no answers because they won’t address the chicanery in the process that directs wealth away from the middle class and the poor.

As I’ve recently been asked to re-explain the basic perversion in all economies, I’ll try to do so again here.

The American social philosopher Henry George noted when taxation is introduced into the distribution of annual production (P), it diminishes the earnings of labour and capital.

In itself, this isn’t a surprise, but if the returns to labour (W) and to capital (I) should not be taxed, how can necessary government be funded?

George said the public revenue ought to come from natural resource rent (R), the surplus arising out of production by the mere existence of the community – that is, not from the efforts of private individuals nor companies.

In other words, where production is distributed to land, labour and capital as rent, wages and interest (P = R + W + I), taxation upon labour and capital would be unnecessary were the annual rent of land and natural resources to be captured for public purposes (P – R = W + I).

If the theory is true, it should be demonstrable in actuality.  It is.

But it can only be shown in the negative, because we publicly capture only a small percentage of our revenue from land and natural resource rents. Therefore, George’s corollary should hold. That is, if we fail to capture publicly-generated rent, wages and the return to capital will fall, and privatised rent, expanding at the expense of labour and capital, will repetitively create unnecessary periods of recession and depression. 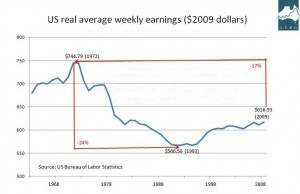 Be warned, the apparent increase from the late 1990s is when the CPI was re-defined! 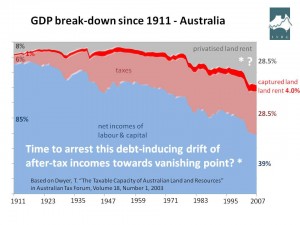 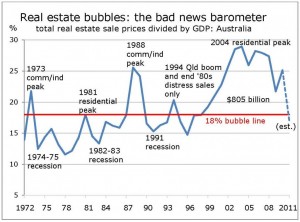 As these are the most basic data relating to the production and distribution of wealth, Henry George’s case is proven, before we concern ourselves with money, credit and debt, which are not wealth but tokens of exchange.

From Henry George’s theory, it would follow that increasing amounts of credit necessarily have to be extended to labour and capital after the fact, because their fair returns have been diminished by taxation. Meanwhile, inadequate land value capture has created unaffordable land prices. It’s not the price of homes that skyrockets, it’s the land.

Therefore, explaining industrial depression in terms of money, credit and debt, which have no place in the above fundamental distributional formula are ex post facto and this is a logical fault.

Although one income is earned and the other is not, neoclassical economics signed onto the scam that makes no distinction between the returns to land and capital in order to defeat Henry George’s conclusions (which I consider to be proven above).

Failing to address the misdistribution of wealth to the wealthy can only have two outcomes, people turning either to fascism or socialism in the vain hope of a remedy.

A radical centrist alternative that doesn’t lead to war is possible: correcting this perverted distribution of wealth by the capture of economic rent for revenue instead of taxes.