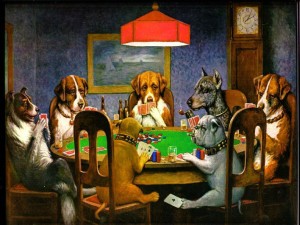 SOME GAMBLE!  (I’d be shorting)

I remember in my callow youth in the mid 1960s being invited to a poker game at the home of a colleague who also worked for the Claims Agent in the Commercial Branch of the Victorian Railways.

I can’t remember whether there were four or five of us playing, but early into the morning I was well ahead when one of them declared he’d have to be leaving shortly.

“We’re not finishing yet, while Bryan is up like this”, insisted my host.

I got the message, and duly commenced to lose before excusing myself with another guest sometime later.

Obviously, the relationship with my colleague changed. Fortunately for both of us, he left the Claims Office shortly thereafter. I’ve never since gambled at cards.

Seems to me, the world’s also playing in a rigged game. Having converted all their hard earned cash into their US host’s chips, world economies find the host has no real money in the game: he’s got someone out the back simply producing new chips for him.

The end of this game also promises to be ugly.

BTW, you Ukranians (recently 4% of the hits here), stop your parliamentarians from brawling!  (Shouldn’t they be home, helping to prepare the borsht and cold cherry soups for Christmas?)