Having learnt from Barack Obama’s mistake of not initially doing so, Julia now places the economy at the top of her agenda.

And so it ought to be. The economy is not something taught in universities by economists (God forbid!), it’s about everyday life, and many aspects of daily life in Australia aren’t looking too good at the moment.

If economic pressures on families continue as they are, they may not be able to give their kids the improved quality of education to which Julia Gillard strongly believes they are entitled.

We’ve had the emergency stimuli, based on what was happening in America. We used the $900 we were given to good advantage. We’ve watched the government play employment favourites with roofing insulation and school building programs. Both had significant problems, and we’ve come away wondering whether the government has acted too precipitately anyway.

Tanya Plibersek, Housing Minister in the Rudd government, introduced the First Home Owners Boost in 2008 to extend the First Home Buyers Grant and to keep the real estate bubble inflated. Most people were not fooled; the action favoured sellers, not buyers.

These measures were necessary only if our economy was about to tank. It wasn’t. We may have been facing a shallow recession in 2009, but as Australia’s property bubble hadn’t burst, as in the US and UK, we were not facing a financial collapse of their order – yet.

Let’s get one thing straight: the Rudd government did NOT avoid the GFC by these stimulus measures, as claimed by the Labor Party. The bursting of Australia’s real estate bubble must occur first – because that’s the correct order for recession and depression to happen. 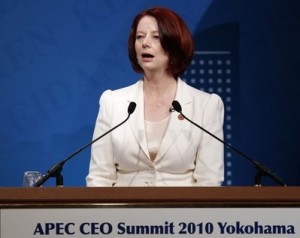 So, the stimulus packages were expensive overkill, and the job is still ahead of you, Julia Gillard. Correct economic action is called for. But you don’t have to wait for our property bubble to burst to do anything, Julia.

You put education high on your list, so get to it. There’s much education to be done if you wish to counter the mining industry’s retention of the people’s rent in their profits. By all means, cut their taxes, but you should explain why we must capture our rents.

Same goes for the Henry Review’s well thought out recommendations for a federal land tax to replace the hopeless array of State land taxes, stamp duties and payroll taxes. It won’t happen unless you help educate Australians to understand our land and mineral resource rents rightly belong to us all.

Get to it, Julia. You should simply explain to everyone why our revenue base must be shifted from labour and capital onto land and natural resources. Sure, you may offend the plutocracy, but it’s the only way to a decent future for all Australians.