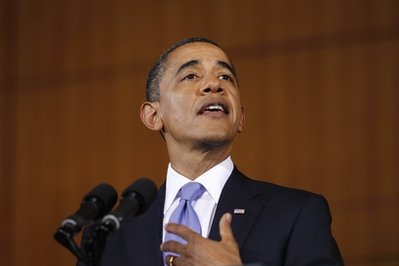 OBAMA AT THE UNIVERSITY OF INDONESIA …

I watched live Barack Obama’s speech at the University of Indonesia today. It was brilliant. He recounted stories of his four years in Indonesia in the 1960s,  making a deep connection with his audience when he touched on the extent of development and relative stability that’s occurred since the politically charged days he remembers as a child (in villages he’s still able to name).

His talk was liberally salted with Indonesian phrases. These were greeted with enthusiasm and applause, and he was able to draw comparisons between the USA’s unity as a nation, e pluribus unum, and Indonesia’s success in striving to unite a former colony of so many islands and disparate languages.

The things that draw humanity together we shouldn’t allow religious differences to divide, and Indonesia’s increasing  tolerance and democracy sets an example to the world, he said. More controversially, he proposed that US involvement in Iraq and Afghanistan is all about helping to deliver democracy to those benighted countries.

The speech was one of his best.

As I watched him talk, I could already see how Obama’s enemies in the US will react. They’ll say he’s more interested in sucking up to Muslims than dealing with the sick economy back home. That wouldn’t be fair.

Nevertheless, having enjoyed his near perfect Indonesian address, I remain thunderstruck at how such articulate and bright people, leaders such as Barack Obama, David Cameron and Julia Gillard, are always economically ignorant. Always! None of them has the slightest clue about what makes economies tick.

… AND CITIGROUP EXPOSES THE ‘PLUTONOMY’

In connection with economic illiteracy, this incredible piece seeming to emanate from Citigroup is worthy of the read. Save it somewhere safely for the odd re-read when you want to get your head around how economies of the world really operate.

The subversive little paper demonstrates that far lesser individuals than presidents and prime ministers are quite capable of understanding how to keep economies working for the favoured few.  It’s barbaric, Machiavellian, but true. It could almost have been written by Ralph Norris.

Whereas Obama and Cameron are surrounded by crooks and economic idiots, Gillard’s Ken Henry stacks up head and shoulders above the throng because he understands the enormous potential of publicly generated rents to replace damaging taxes.

Unfortunately, Henry’s flagged that he may have had enough and wants to retire next year.    [sigh!]  🙁

3 thoughts on “SO BRILLIANT, SO ECONOMICALLY ILLITERATE”