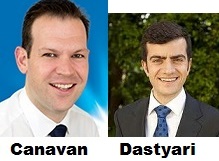 What market, Senator? In what way is the property market really a market in the absence of a significant land tax which poses the surgical question “Am I actually using this property, or am I simply holding it off the market for capital gain?”

If car manufacturers hold cars off the vehicle market, their models will become dated, devalue and eventually rust.

If tomatoes are held off the veggie market, they’ll rot.

If a residential property is held of the market its land price will usually continue escalating upwards.

Immediately afterwards, Lyndal Curtis interviewed Labor Senator Sam Dastyari. Unfortunately, Sam wasn’t much better. It was our growing population and issues of shortage of supply that have our residential property prices at these high levels.

Let me pose this question to both senators.

If we had an all-in, single rate federal land, tax rebated back to the States, as suggested by the Henry Tax Review, what do you think would happen overnight to the Australian real estate market?

That’s right! It would stabilise and probably decline.  So, in whose real interests are our senators acting, may I ask?  People trying to sponge further off the community like this? – because it’s certainly not first home buyers!

Although supply and demand does matter, we do need an overarching view: we need to understand that land prices represent the capitalisation of the net land rent left in private hands.  If the government were to capture more land rent instead of taxes, there’d be less land rent to be capitalised into land prices.

Pretty simple! But two of “the nation’s best” managed to overlook the point. So, I repeat: In whose interests are our senators acting?