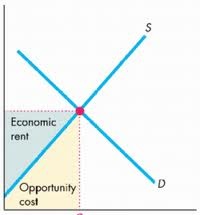 So, if all the economics textbooks have to admit that Henry George was right that revenues from economic rent cannot be passed on in prices like taxes–generating massive deadweight in the economy–how can the 0.1% fight back?

Why by disinformation, of course! By lying to say the quantum of rent is insufficient:-

The chart on the previous post gives the lie to these six gross misstatements, as does Karl Fitzgerald’s Total Resource Rents of Australia, 2013, which should have made the headlines all around Australia, but has been buried by the neo-classical economics fraternity who have a lie to uphold for their bosses.

See also post –> How to corrupt the economy in favour of the rent-seeker.

Australians (and others) would do well to demand answers from economists and politicians about the vast quantity of community-created economic rent being privately stolen by the 0.1%, because ignorance on the subject allows the super-wealthy to continue capturing more and more of the GDP at the expense of the 99.9%.