Few positives to be found in negative gearing 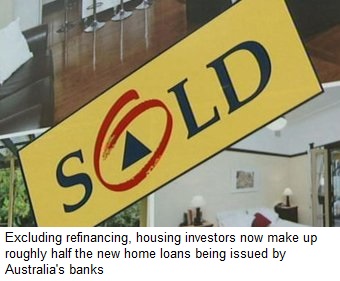 Negative gearing and our pro-debt tax system may help the wealthier few but in the long run it could come back to bite us all. What’s worse, the Reserve Bank is handicapped when it comes to guarding against this, writes Michael Janda.

Last week I wrote about the Bank for International Settlements’ attack on its central bank members for their low rate policies.

In its annual report, the BIS warned that low interest rates were fuelling booms in financial markets and asset prices, even while lending to businesses and economic growth remained slow.

It called for central banks to stop printing money and start lifting rates back towards more normal levels now, rather than leaving it for later when a more severe and sudden adjustment may be needed.

But the BIS didn’t lay all the blame for surging asset prices at the foot of the world’s central banks.

“It also means designing a tax code that does not favour debt over equity,” the bank urged in its report.

And Australia offers one of the best examples of a country where the tax system favours debt.

The prime culprit is negative gearing.

Usually only featuring in public debate in its real estate context, the ability to write of interest payments against other income is not just available to property investors, but also to shareholders, businesses and other investors.

But it’s the real estate sector that probably generates the biggest threat to financial stability, and a drain on economic growth as investment is diverted away from businesses towards bidding up home prices.

The Grattan Institute estimates that real estate negative gearing costs the Federal Government coffers about $4 billion a year, which might fall to a saving of about $2 billion a year if it were abolished as people would change their behaviour.

But this figure grows strongly every year, as surging property prices mean ever more investors now make a loss on their investment property.

The number of property investors has jumped from 1.3 million at the end of last century to nearly 1.9 million in the latest 2011-12 financial year tax statistics.

Landlords back in 1998-99 managed to turn a combined profit of $700 million. On face value, the new ones who have jumped in appear to lack the same financial nous, as their losses stand at just under $8 billion.

The vast bulk of those losses come from more than $24 billion in deductions for interest payments.

Let’s face it, if you’re paying more in bank interest than you’re earning from your asset year after year – whether it’s rent from property or dividends from shares – there’s only one reason you’re holding onto it, and that’s capital gain.

When an investor buys an asset mainly for capital gain with little regard to income flows that is speculation.

When lots of investors do it at the same time, that is a bubble.

That preponderance is also showing up in a shift towards investment loans as a proportion of outstanding home borrowing.

Starting at about 14 per cent in 1990, investors now make up more than a third of the balance of all outstanding home loans.

It’s probably no coincidence that the big surge in investment loans came in the late 1990s, around the time the Howard government changed Capital Gains Tax rules to institute a flat 50 per cent discount in place of the previous indexation.

That’s because it’s been the interaction between the new CGT system and negative gearing that has created the opening for tax minimisation.

By itself, negatively geared property is clearly a bad investment – even though other taxpayers are subsidising your losses, you are still losing money.

But add in the prospect of capital gains taxed at half your normal income tax rate and the whole system begins to make more financial sense – at least while property prices keep rising.

If the rise in value is big enough, investors can stand to make a lot more from the low-taxed capital gains that they lost from their taxpayer-subsidised interest payments to the bank.

For those on middle incomes, only 9 per cent have an investment property loan, and the proportion of investment loans for low-income earners is unsurprisingly negligible.

That shows negative gearing is overwhelmingly skewed towards lowering the tax bills of the relatively well-off, not benefiting the average mum and dad battler.

That is unsurprising, as it takes a pretty high income to be able to sustain all the interest-related losses on your investment property while you wait for its value to go up enough that you can flog it for a worthwhile tax-discounted capital gain.

In the long run everyone will lose

But back to the BIS and its financial stability focus.

From that point of view, the big problem with this tax system is that it encourages excessive household borrowing, subsidised by the public purse, and going into an asset class that does nothing to add to the country’s productivity or economic outlook.

Much of this money in Australia is actually imported from overseas via our major banks raising so-called wholesale funding offshore – Australia’s big foreign debt problem is not government-related, it’s our mortgages being underwritten by overseas investors.

In weak economic conditions, it cannot lower rates as much as it might want to encourage business borrowing and economic growth because it knows that housing investors will instead be the dominant borrowers to bid up home prices.

In stronger times, it cannot raise rates as much as it might if tax policies were different because Australian households are so indebted that even a small lift in mortgage costs might tip many thousands into default.

It also means that millions of Australians – both the negatively geared investors and the owner-occupiers that had to pay too much for their home because of competition from them – are vulnerable to the slightest economic shock because so much of their income goes towards repayments to the banks.

In the short term, the banks that profit off the rising debt and the real estate sector that takes bigger commissions and bigger development profits out of the surging property prices.

That’s why these two sectors squawk loudest when any changes to these pro-debt tax concessions are proposed, such as Paul Keating’s attempt to wind back negative gearing in the mid-1980s.

But, in the long term, these sectors stand to join Australian property investors and homeowners as losers when the capital gains stop and the losses begin to bite.

Michael Janda is an online business reporter with the ABC. View his full profile here.