It’s not all about GST: why land tax should be on Hockey’s agenda

New truths lie at the centre of the tax debate in Australia. If you weren’t paying very close attention, you might have missed their introduction.

Top echelons of tax policy now take as given the following ideas:

This technocratic takeover of the tax agenda is global. It has come about over several years, led by the likes of global consultants PwC and economists at the Organisation for Economic Co-operation and Development. In Australia it has found support in Treasury (and The Australian Financial Review).

In this context, possible changes to the GST aired this week should be seen neither a tweak as a sop to the states nor a passing fad. They represent a seismic shift in thinking on how best we should raise taxes. Like tectonic plates shifting and building up pressure, the change in thinking has built up over time.

In the Henry Tax Review the germ of the current thinking is visible. While arguing for keeping personal income tax, it advocated for “growth-oriented corporate tax” — code for lower rates. It also pushed for a land tax.

In preparation for the 2011 tax forum, the Business Council of Australia argued for reducing “reliance on volatile direct taxes in favour of more stable indirect taxes such as consumption tax and land tax”.

The argument for taxing immobile factors like land and supposedly immobile functions like consumption is motivated by the erosion of traditional tax bases. 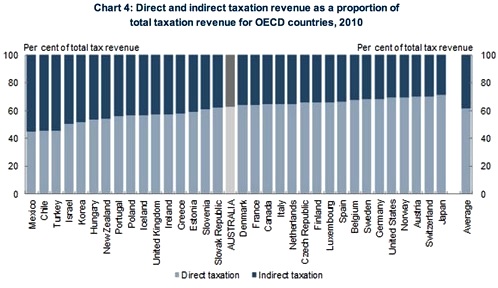 Australia is far from an outlier in its ratio of direct to indirect taxes (source: Treasury)

The argument for indirect taxes is established and now being made very close to the beating heart of government. Treasury Secretary Martin Parkinson said this week in a speech to the Sydney Institute:

Parkinson promised the white paper on taxation would be explicitly tasked to consider the mix of taxes, “including whether there is a role for a greater contribution from indirect taxes”.

Some relevant research has been done in Australia, but some of the research to which Parkinson refers relies on findings relevant to Europe.

An OECD paper describing a QUEST model simulation found that following a shift toward indirect taxes “there would be a positive impact on employment and output, even though for many salaried workers the gain from lower direct taxes would be offset by higher goods prices”. But the same paper admits that not all evidence points in the same direction:

“The example of the Nordic member states shows that high levels of taxation can be compatible with high employment and competitiveness levels. Nevertheless, ceteris paribus, reducing taxes on labour could be a useful tool to stimulate employment.”

This is not to deny the sense of the idea, nor the good intentions of the OECD’s experts. Taxing things other than productive activity makes sense if your goal is to grow productive activity. This chart from the Henry Tax Review sums up why land tax and GST are preferred to payroll and company tax: 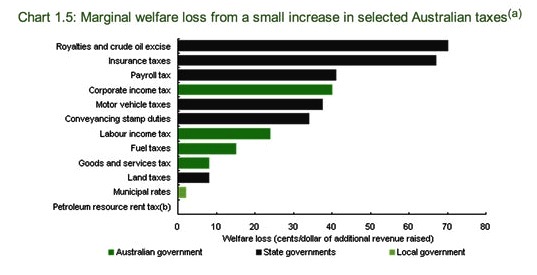 A question mark remains over whether indirect taxes can be as progressive as the personal income tax scales. But they need not be regressive.

Consumption taxes are useful because they raise revenue from those with a lot of wealth as well as those with a lot of income. The rich tend to spend even when their assets are returning low or negative income. And land taxes can be progressive, especially if they are designed with an appropriate rate and threshold.

Even if progressivity were maintained under a system of indirect taxes and radically lower income taxes, it would be less transparent and legible to the layperson than before. You can expect that to lead to a political barney over how to measure progressivity.

Not everyone has got the memo about the change in thinking. Here’s Alan Kohler late last year:

“While increasing the rate of GST and/or closing its holes should not be off the table, doing that would hit poor people the hardest. Increasing income taxes — gradually, over time — would raise more money and be fairer.”

The Greens are also keen on raising marginal rates, to 50% on incomes over $1 million.

These arguments still make sense and are easy for people to grasp. Years of focus on income taxes mean that’s what citizens expect to be in play when the conversation comes to tax reform. And those expectations circumscribe the freedom of politicians.

As Treasurer, Joe Hockey may be tempted by tax changes that could boost growth. But as part of the leadership of a government with a popularity problem he will find it difficult to implement what the technocrats expect. People are not yet ready for this. Evidence Hockey can sniff the wind came as he swiftly moved to deny that the government plans to lift the GST.

Of the two main indirect taxes, there is much more noise around the idea of a higher or broader GST. But should GST be sucking out all the political oxygen?

It is avoidable, as illustrated by the stink over online shopping thresholds, and by the incredible surge in the number of Australians spending their savings on overseas holidays. (In January, according to ABS trend measures, 753,000 Australians went abroad, a record number that represented 8.1% growth over the year.)

Land tax has the advantage of being one of the least distortionary taxes available, and has capacity to raise large amounts of revenue. But it lags far behind the GST in terms of public visibility.

In the ACT a land tax is being introduced to substitute for the wildly distortionary transaction taxes. Whether such a tax can establish a constituency beyond the policy-wonkish landowners of the ACT remains to be seen.

*Jason Murphy is a former Treasury economist and Australian Financial Review journalist. He blogs at Thomas The Think Engine.