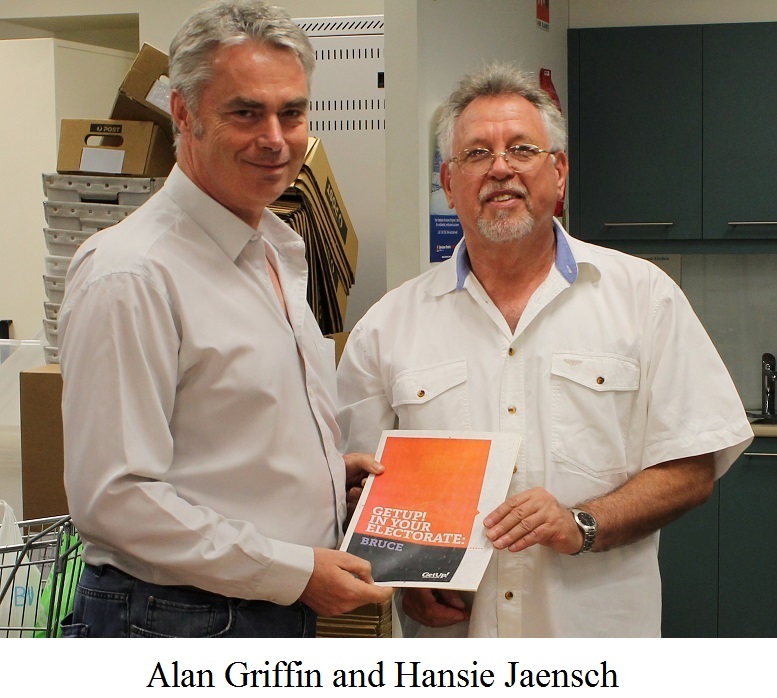 As a member of the community activist group, GetUp! I went along with five others last night to meet with the ALP federal member for Bruce, Alan Griffin, at his electorate office. We represented the 2412 GetUp members in the electorate of Bruce.

All federal members are being canvassed on the issues GetUp’s 600,000 members voted last year to be their main concerns.

They were identified as:

The cumulative effect of this Australia-wide process will be interesting.

I had been selected to speak on tax reform, and, after introducing myself, my contribution was as follows:

1. A fairer tax system was voted GetUp’s biggest economics issue, but Productivity Commission inquiries and discussions on manufacturing and labour relations miss the point that tax systems that gave the wrong signals by fining workers and businesses and rewarding real estate speculation delivered us into this global financial collapse.

2. Our kids can’t afford a home, and virtually all sales are currently to investors – often overseas investors at our kids’ expense – but our politicians are reluctant to interfere with this hopeless situation.

3. In 2007, before the 2008 crash, I produced a study of real estate bubbles showing that since 1970 it has become fashionable to wind back property-based taxation, which used to help fund dams, bridges, highways and other infrastructure.

Today, we wonder how to fund infrastructure and we sell off our public assets for 30 years under PPP toll arrangements – and these are beginning to fail.  (What about ‘beneficiary pays’, instead of ‘user pays’?) For example, the new Brisbane-Gold Coast light rail has increased residential land values by up to $100,000, but this was not used to fund the project directly by capturing a small part of the uplift in values.  Compare this to the 1920s extension of the railway line from Darling to Glen Waverley, which was funded out of a ‘betterment’ rate applied to nearby properties.

4. The Henry Tax Review lists the 40% petroleum resource rent tax on profits we’ve had since 1987 as having no social cost, compared to royalties and crude oil taxes at a social cost of 70 cents in the dollar, and payroll taxes at 40 cents in the dollar. Therefore, Kevin Rudd’s original 40% resource super-profit tax on mining had excellent credentials. However, Tony Abbott gloats that he is removing the federal minerals resource rent tax, but leaving State mining royalties in place!

5. The Henry Tax Review also noted that 115 of Australia’s 125 taxes are most inefficient–they raise only 10% of revenue–and should be abolished.

6. Because of the mobility of labour and capital, Ken Henry saw the need for greater emphasis on mining and land taxes that cannot flee the country, and KPMG-Econotec modelling of the Henry Tax Review findings showed that, next to the petroleum resource rent tax, the most efficient taxes are municipal rates and land taxes. Under these, the super wealthy would pay their fair share.

SO, HOW CAN “GETUP” ASSIST YOU TO GET A FAIRER TAX SYSTEM, MR GRIFFIN?

As each GetUp speaker provided a clear exposition of their respective topic, Alan Griffin proved to be a good and amiable listener, inserting his own comments into the discussions.

He noted the ALP is no longer in power and provided no assurances.

As Victorian manufacturing goes further down the gurgler with the announced closure of Alcoa’s Point Henry aluminium smelter yesterday, Neil Mitchell sought responses from people on his radio program on 3AW today.

Nobody suggested that a crazy tax system that penalises productivity and rewards us for being parasites is at the root of our widening social and economic problems.