If the Coalition is serious about addressing our ‘budget emergency’, then it should start with the billions of dollars in foregone revenue that the government fails to collect annually via selective and differential tax policies. Simply slashing expenditure won’t cut it.

A new report by the International Monetary Fund – on Italy no less – provides important insight into Australia’s tax system. No other advanced country foregoes more tax revenue, through “differential, or preferential, treatment of specific sectors, activities, regions or agents”, on an annual basis than Australia.

This can take the form of selective or differential allowances, exemptions, rate relief, credits and tax deferrals. Australia has seen them all: negative gearing, capital gains taxes and superannuation concessions to name just a few. 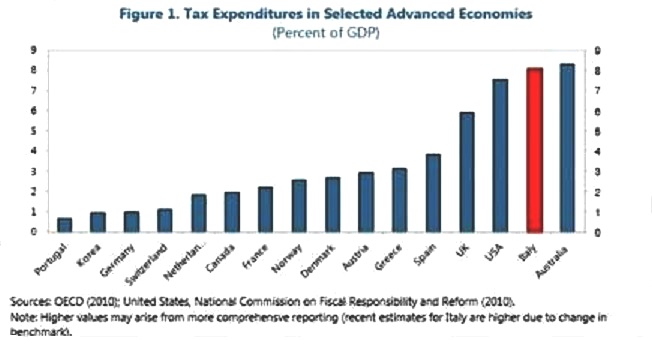 These revenues are important since they have “major consequences for the fairness, complexity, efficiency and effectiveness” of the tax system and the broader economy. They change incentives and create opportunities for certain sectors (individuals or organisations) to succeed at the expense of others.

The IMF estimates that this behaviour reduces Australian government revenue by around 8 per cent of GDP. This is more than enough to completely cut the deficit, sharply reduce government debt and leave the budget well placed to handle a declining terms of trade and an ageing population.

Australian governments – of both the left and right persuasion – have proved to be wasteful in recent decades. For the most part, we could afford it. An unprecedented period of prosperity provided ample opportunity for tax cuts, welfare increases and pork barrelling … so much pork barrelling.

We spent money like drunken sailors, feeling smug about our modest surpluses, and then suddenly the money dried up. Tax revenues fell sharply as the global financial crisis began and they have, at best, only mildly improved since then.

The political narrative has been one of reckless spending. But the truth is that our budget deficits are a result of a narrowing tax base and tax cuts that went too far too quickly and without regard for the future.

It was a simple narrative, one with clear lines of blame and appeal to voters, but it missed the complexities of government budgets. It would have been a much tougher sell to blame the population for getting old or for not earning enough or for struggling to find work. It would be a tougher sell still to blame excessive tax cuts.

The Coalition understands this, though it will not admit to it publicly. Look how quickly it wound back its surplus pledge – implicitly recognising the difficulty of running a surplus while dealing with a narrowing tax base and unfavourable demographics.

Now it faces the difficulty of addressing the issue. The evidence so far suggests its members are thinking too narrowly and failing to identify the real issue. The Commission of Audit, set up to identify spending cuts across the government, is a valid endeavour and one worth pursuing but one that is clearly too narrow. The Commission will find a range of spending cuts but that will do little to create a sustainable long-term budget.

If we have a budget emergency – as the Coalition has suggested – then everything should be on the table. Last week I discussed many of the issues that need to be addressed, including winding back negative gearing, cutting superannuation concessions for the wealthy, the aged pension and broadening the tax base via a land tax (Raise taxes to reduce inequality, January 24; A tonic for Australia’s inequality ills, January 27). Those suggestions were made with reference to improving inequality, but they are equality valid approaches to creating a sustainable budget.

Understandably, some people are upset at the prospect of paying more tax. But the truth is we are a relatively low tax-paying country and, as the IMF has shown, there are plenty of ways to avoid paying tax.

Improving our budget balance now – and more importantly, creating a sustainable budget in coming decades – will require hard and often unpopular decisions. But if the Abbott / Hockey government is serious about debt reduction, then it must make those decisions and, in the process, create a long and worthwhile economic legacy.

One thought on “FIX THIS TAX MESS!”