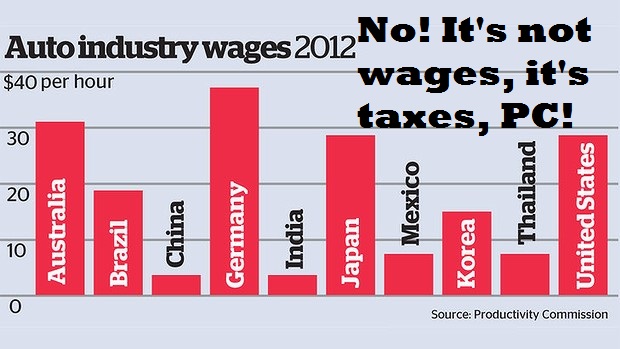 PRODUCTIVITY COMMISSION FINDINGS and my comments

It costs too much to produce cars in Australia. Too few are produced in our three assembly plants.

Labour costs aren’t much higher than in Germany or Japan, but they’re four times dearer than in China, Thailand and other developing countries.

Er, wait on … haven’t Germany and Japan done OK selling their cars? So, maybe something else may be wrong in Australia? Something like we’re in too much mortgage debt to replace the car?

Really? There aint a lot people about who’d like a car–or want to replace their old car? Surely, you mean there’s not sufficient effective demand worldwide? Maybe this is not over-production but under-consumption?

Maybe the problem is that most Australians (and many people worldwide) haven’t the wherewithal, the scratch, to buy cars because the credit card is maxed out. Some might say we’re in a depression.

And haven’t tax regimes that favour inflating land bubbles and fining producers and purchasers got something to do with that state of affairs?

The Henry Tax Review thought so, and recommended instead of taxing labour and capital–mobile factors of production–that we should change the emphasis to immobile land, including minerals.

Maybe Ken Henry was onto something, Productivity Commission? Maybe that’s where we can cut our costs astronomically, because taxes and their deadweight cascade right throughout the Australian economy and add vastly to costs.  (Land rents don’t do this, guys!)

One thought on “AUSTRALIA BECOMES DETROIT: FORD AND HOLDEN GONE …. TOYOTA NEXT?”