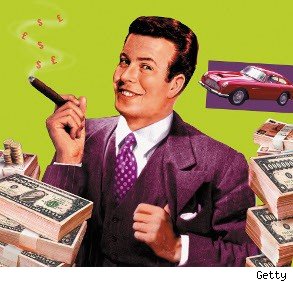 Once you’ve understood that you’re only on this planet for a short period, certain things should become clear to you. Namely, there’s only a few people who are life’s winners; the vast majority will die losers.

Don’t advertise the fact but, to be on the winners’ team, no matter how unfortunate this may sound, you must make your way in life at the expense of all the losers. This is a zero sum game – and you don’t want to be among the zeros! It’s paramount that you work from this understanding and, if you throw yourself into it, wealth must come your way!

Here’s how to get workers and capitalists working for you, without their knowing. Get real estate in a good location, then …. get more.

It’s so easy, if you do it right! Leverage yourself properly and you’ll be able to claim the interest charges on your tax. Of course, your tenants will also help to pay off the mortgagea. Memorise this:  “Rent is for the payment of interest.” Tenants can’t use this insight. Nor can they claw back all the taxation they’ve ever paid over the years per medium of their real estate capital gains! But you’ll certainly be able to do this! Politicians won’t stand in your way because we have political clout.

You see, as wealth is created, a surplus above costs and profits is spun off in the process. It’s called land rent. Some losers may say that it’s owed back equally to the whole community to pay for necessary government, education, health, law enforcement and capital works (for which the term ‘infrastructure’ is now the buzzword). But if we can get this rent–and we do in most cases–the losers will have to derive their public revenues from elsewhere, namely, from taxing the productivity, thrift and enterprise of those to choose not to be rent-seekers, or, as the French say, ‘rentiers’. Lovely word!

Sure, we’ll pay taxes, too, but we’ll be able to claw back each and every red cent of any revenue we pay through the increases in the value of our properties. If challenged, our quite legitimate disclaimer is: “The tax system made me do it!”

The two principles behind this idea are that rent in good locations is better than the rent in inferior locations, and publicly-generated land rent NOT collected by government will be crystallized into larger capital gains for us. This is the privilege granted to those with the insight to see the world for what it is. It’s dog eat dog out there, and it’s better to be the devourer than the prey, folks! There may be ways to make this sound much nicer, but that’s your bottom line.

You don’t have to do much at all to grow your wealth in this manner. Let the community do it all for you. But, of course, at every opportunity make people aware, as you monitor your rents and capital gains, that your work is as difficult as any other job and that it is an honest living. The tax system encourages all Australians to do it, and if many prefer not to, then they clearly identify themselves to be among life’s great losers. It’s just that we at the top do it better and hold out hope to the plebs that they, too, may hope to join in this game.

Some naysayers will suggest that living high on the hog as a rentier is ‘like parasites living off the productive effort of others’, but that’s an easy-to-wear tag once you’ve seen the upside! Anyway refute this, by claiming to be a provider of accommodation!

There’s just one further thing you do need to secure your position. You should scream blue murder against council rates and state land taxes at each and every opportunity! “A man’s home is his castle”, and it’s quite unconscionable to have to pay taxes on properties for which you’ve bought and paid. They’re yours! You own them! Right? “Taxes on land penalise and deter property development” always works, too, even if it is untrue.

In this regard, you’ll be supported by the churches.  They’ll always see the merit of your claims, as they also baulk at paying charges on their lands. They understand on which side their bread is buttered, because they are winners, too. Not necessarily their congregations, of course, but certainly their hierarchs who are entrusted with the management of their property and funds. George Pell, for example.

In fact, some of the churches have recently taken rent-seeking to new heights by being amongst the country’s biggest tollway investors. Tollways and private ownership of public utilities are other forms of the meretricious taxation we winners should be promoting. You can encourage these charges under the guise of ‘user pays’! Even if you don’t use the tollways, they’ll certainly add value to your properties! But, remember, we number the churches amongst our friends. Forget the rubbish that you must not capitalise land values for you are but passing strangers who must pay the rent, Leviticus something or other: what would he know?

So, let governments tax anything but the value of the land we hold. You’ll find the losers will support you on this because they are too unsuspecting and thick to see the manner in which taxation rips them off to our advantage. They actually believe that taxation can be used as a means to redistribute income, that is, to narrow the gap between we and they, although of course it must do exactly the opposite!

“No land or property taxes!” must remain the catchcry of both winners and losers – or else our free ride is over! See to it! You might even get public radio and television stations to promote residential property ‘investment’! Good luck, and happy rent-seeking, my brother and sister Selectorati!