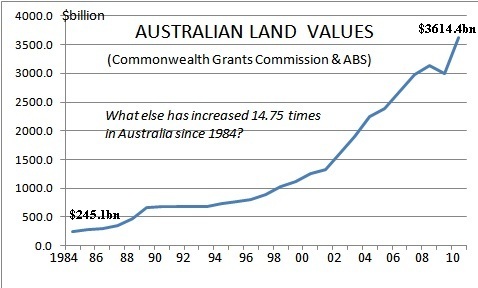 “Such warnings [as in China]” are necessary in some countries, but Australia isn’t there yet, and when a few pertinent statistics are put into context then talk of a bubble starts to look sensationalist.”

“The Reserve Bank has cautioned against ‘unrealistic alarmism’ about a possible property bubble in Australia, a day after it offered a muted warning to banks about prudent lending standards.

“Houses are a particularly dangerous asset because they involve a lot of debt, and a small percentage move in prices represents a lot of money. Even if you believe the chances of a house price crash are low, the size of the impact of such an event means that your optimal strategy may be to reduce your risk.”

“The volume of debt contained within the height and breadth of the recent residential bubble offers a strong degree of confidence to suggest that Australia will experience a severe economic recession within two years of the graph retreating back below the 19% bubble line.”

But the Land Values Research Group called the bust on 3 March 2009 – and more than two years have passed since that time?

Yes, but the Australian government, having learnt from US and British experience, has managed to “kick the can down the road” by such fiscal stimuli as giving everyone $900, providing pink insulation batts for roofs, and the “building education revolution” construction boom. The national debt attests to the significant level of pump priming that has been necessary to stop the bubble from bursting on the watch of the Labor government.

There’s a sort of rough justice in a Liberal government being in power to attend to the leveraged calamity of the bust, because by far the greater part of the residential property bubble was permitted to develop under the Howard Liberal government.

One thought on “C’MON, THERE’S *ALREADY* A BUBBLE!”