Inquiries into housing unaffordability always involve much cant and hypocrisy, because they usually turn out to be exercises in inflating prices even further.

To help get young people into a home in Australia we’ve had a “first home buyer grant”.  As vendors quite correctly regard it as a reason to increase their asking prices in order to profit from such a government-granted bonus, it would more properly be named the “home seller’s grant”.

You will NEVER see recommendations for land tax in order to make housing more affordable, even though it most certainly would. The property lobby even goes so far to say land tax will make houses dearer, but it won’t provide an answer to the simple question: “For which block of land would you pay more?”

A tension has developed between the generations: smug older homeowners with their mortgages paid off, or nearly so, versus Gen Y unable to afford somewhere to live as a result of bubble-inflated prices.

Another reason land tax can’t be mentioned in this context is that banks don’t like land tax. Escalating home prices are good for banks, especially when land prices in Australia have developed into an enormous profit-generating bubble since 1996.

So, with banks and most Australians who purchased at lower prices to be appeased, tax reform is off the radar in the September election.

BUSINESSES ALSO IN TROUBLE AND UNEMPLOYMENT FORECAST TO RISE

It’s the same process, of course, that’s seeing businesses being wound up in great numbers in Australia, many by the Australian Taxation Office. But banking and real estate, having been set upon a pedestal, make their super-profits at the expense of business and good government.

Watching Alan Kohler’s Inside Business on the ABC this morning, I was entertained by his expert panel winking and nodding as they discussed the faux emergence of the US and Europe from the Great Recession and the over-valuation of world sharemarkets.

The dye has been set. There will be no world recovery as long as  1) property owners retain the unearned increases in the value of their land and  2) we continue to tax people and businesses for daring to work.

Although our arse-backwards tax regime has generated both housing unaffordability and a financial collapse, most of us remain completely wedded to the status quo. We’re having this depression because we fear revenue reform.

Now there’s a grim irony!   [Bob Dylan has it just about right in his best ever song.] 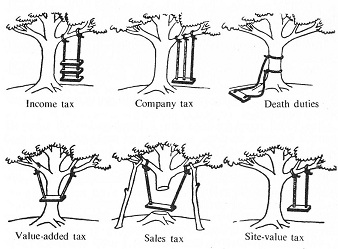