So S14 has become S7? Would it be too churlish to think that’s about the biggest political change we can expect “going forward” as they say?

Oh sure, the Lib/Labs will screw us over in different ways, but it’s tantamount to each of the political parties deciding which of the Titanic’s chairs they will re-arrange for us as they direct us towards the inevitable iceberg.

If I don’t agree with him on guns, I’m certainly with former Minnesota governor Jesse (the body) Ventura that political parties are proving to be a blight on western society because they’ve slowly but surely become corrupted.

Now wait a minute! I’m not simply being negative. I’ve thought this through from a long way out and it sends my blood pressure racing to watch Australia relentlessly following my script into a depression, a script that says without the necessary political action we’re about to put many Australians and their businesses onto the scrap heap, signifying the period of Nikolai Kondratieff’s fourth long wave since 1790.

Economists don’t believe the K-wave exists. They can’t, because it demonstrates their supreme impotency which came about when they threw out the classical handbook and began to conflate land with man-made capital. Almost to a man they now hold that the future is unknowable, and, as if to underline the point, Treasury has just announced a revenue write-down of $33 billion in a matter of months. And it aint going to get any better, guys! You can forget about that proposed surplus for financial year 2017!

Well, I understand how an economy works because I am both a Henry Georgist and a real estate valuer. I know Australia has to generate real wealth, not just blow up asset bubbles which only provide the pretense of wealth.

I know the tax regime has increasingly given a green light to rent-seeking and a red light to labour and capital since 1972; such that average real wages are now less than they were in 1972, and; such that the current level of household debt can no longer be repaid.

Most importantly, I know the difference between land values and land prices. I know what constitutes a bubble. And that bubbles burst.

However, it aint just me, anybody with an open mind knows something has to give, and in a big way, unless we act immediately to change our tax system to support all Australians, not just the privileged few.

A revolutionary change along the lines of Ken Henry’s excellent recommendations which will capture much more of our publicly-generated natural resource rents will certainly help us resist catastrophe. (Remember the original mining tax? Remember the all-in land tax?)

But governments, ignorant of the overarching picture I’m able to paint because they believe their economic advisors, will most likely continue supporting the “big end of town”–banks and other rent-seekers– in a futile attempt to keep land price bubbles inflated, instead of properly managing their deflation.

Bubble in land prices, some may ask? Yes, take a look at this biggie. Some mistakenly say it’s caused by population growth and a concomitant shortage of land, but as I’ve divided the total land prices of Australia by our GDP that takes care of such overly-simplistic excuses. 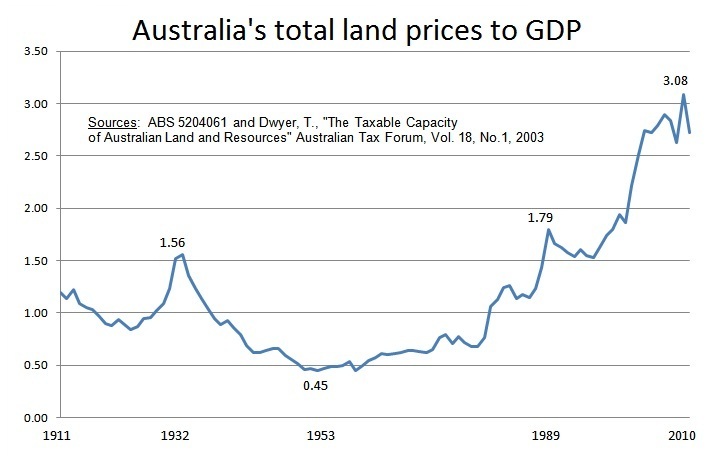 You’ll see land prices got as high as three time our GDP because the tax system favours rent-seekers and fines creators of real wealth. This only assists the 1% and is quite wrong: full stop.

So, in the early 1990s I thought I’d create an index that would hit people between the eyes to make my point. What if I was to gather all Australia’s real estate sales, residential, commercial, industrial and rural, and divide their prices by our GDP for each year? Would the index confirm my analysis, I asked myself? 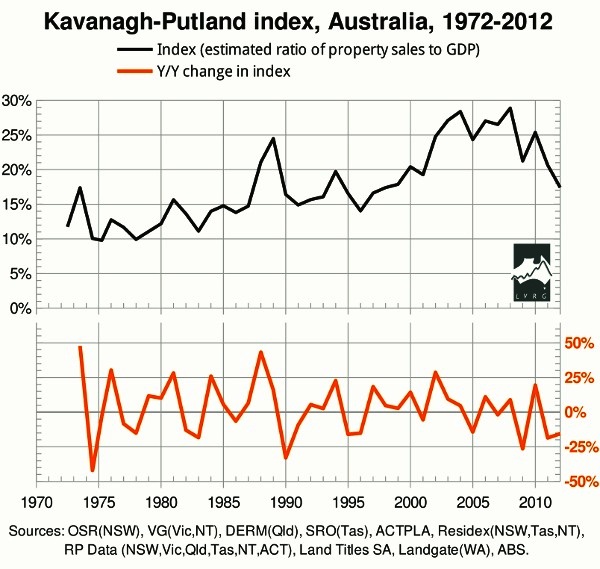 It does. You’ll note the current massive bubble from 1997 is well into its final deflation. Australian governments will usually change hands at the end of each real estate bubble as the change in the index closely approaches, or crosses below, the -25% mark. This one looks headed below the -50%!

Some people hold that the share market is the best economic indicator, but it’s not. You won’t have a recession or depression if the real estate market hasn’t burst first. It had in the mid-1920s: it hadn’t in October 1987.

Initially dubbed the “Barometer of the Economy” in a number of public addresses I’d given, my index morphed into the “Kavanagh-Putland Index” (or KPI) more recently, after I had secured the estimable mathematical assistance of Prosper Australia’s Dr Gavin Putland.

Don’t let Australia’s politicians know (because they won’t listen anyway) but there’s $1 trillion to be written off in the current real estate debt bubble before Australia can hope to emerge from the upcoming disastrous price-drop. It’s not at all shaping up well for Australian society. Unless, that is, as Professor Irving Fisher said before the US stock market collapse of 1929, we have reached “a permanently high plateau.”

If neither political party has the fortitude to press for the Henry Review panel’s recipe for reform of Australia’s terminally ill revenue regime, politicians of all stripes are likely to prove to be as delusional as Irving Fisher when he was faced with a real depression. This one’s as real as they get, so it’s not time for the political process to freeze!

As the parties remain in denial, this bodes to be a “nothing” election for the Australian ship of state. Watch out as they start moving those chairs about your feet and around the deck, folks!

17 thoughts on “WITHOUT REVENUE REFORM THIS IS A POINTLESS ELECTION”