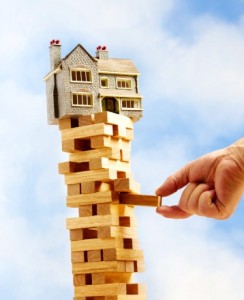 Robert Gottliebsen is a longtime Australian financial commentator, but he hit a bump in the road in Business Spectator today in a piece entitled “Haunted housing”.

It typifies all those confusing analyses that have it that increasing house prices, at a somewhat unidentified level, are good for people and the economy.

“The economy is recovering because house prices are up” is an incorrect statement – even if we do receive a perverse warm inner glow when the price of our home does increase.  A little thought would show that it’s only good for real estate agents whose fees are based on the sale price of homes.

Anyway, I couldn’t help myself, so I had to respond:-

A garbled Goldilocks account Robert! You suggest China’s house price increases are too high, ours are too low, but the US is “just right”. As a developer of a real estate index–prices to GDP as a yardstick of the social and economic health of the economy where higher ratios are worse–and who forecast the global financial collapse I’d agree China’s real estate prices are too high, but so too are America’s if the data we’re receiving is correct. I’d go so far as to say rising house prices in the US are clear evidence that its economy is NOT recovering, because the housing deflation must be allowed to take its course, instead of propping banks up as for the last 20 years in Japan. The process could be rapidly expedited, however, by instituting something like the Henry Tax Review’s proposal for a federal land tax accompanied by the slashing a multitude of taxes on labour and capital with all their deadweight: but as Eliza Doolittle remarked that’s “Not bloody likely!”