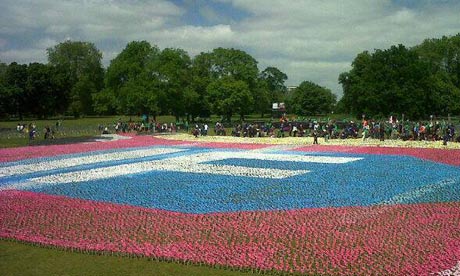 There they were in London’s Hyde Park yesterday; some forty-five thousand of them.

The Big IF, a coalition including Unicef, Oxfam, Save the Children and Christian Aid had organised the rally “Enough Food for Everyone IF” …

People at the event in Hyde Park laid a striking feature of plastic flowers to symbolize the millions of young people who die each year from malnutrition.

Philanthropist Bill Gates and others addressed the crowd or sang to them. Apparently more money will help fix the problem – certainly NOT stopping the 0.1% from stealing the peoples’ land and rents. That’s not on.

Over at Westminster $4.15 billion was pledged to tackle malnutrition and poverty.

There’s another rally next weekend in Belfast.

It’s amazing how many people will turn out for extravaganzas pointing to the results of the 0.1% running amok, The Big If, Live Aid, etc., but I guess it does keep the big charities running …  If only they wanted to really stop the cause of poverty and dispossession.

Meanwhile, people pragmatically wanting to put an end to poverty–by ending taxation and making the 0.1% pay the rent for the natural resources they deny to the dispossessed–continue to hold their meetings in a telephone booth.

Paradoxically, it seems you can get the numbers up for anything except the remedy.