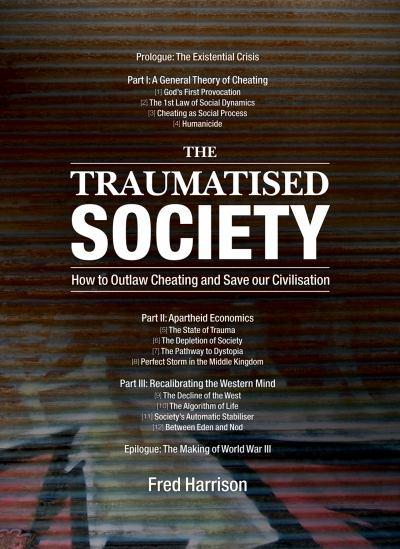 In The Corruption of Economics, Mason Gaffney provided chapter and verse for the manner in which the study of economics had to be recast in order to hide the disastrous role played by private rent seeking. Neoclassical economics had arrived, magically transforming land into capital.

Michael Hudson, one of the few economists to have forecast the global financial collapse, explained in The Bubble and Beyond how banking, finance and real estate had been co-opted to feed this parasitical process, overtaking and rendering real wealth creation obsolete.

Now comes Fred Harrison’s The Traumatised Society. It amounts to an urgent call to retrieve society’s surplus if we are to survive this damning period of institutionalised cheating.

The superbly referenced and eminently quotable book is the most important work of non-fiction in the last sixty years. It is a reference for leaders of politics, religion and science if Western civilisation is to recover its position and survive. Harrison’s confronting challenge is that bleak.

“In my judgement, Western civilisation has reached the tipping point. The tools to rescue the West are available, but they are not discussed by those who are supposed to be the guardians of the public’s welfare. The trauma that afflicts their societies embraces them as victims, distracting them from the root cause of crises.”