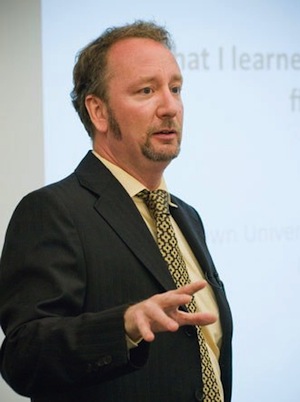 Forget the Australian budget: it was a yawn.

However, if you can get your head around his broad Aberdeen accent, Professor Mark Blyth has to be one of the world’s most entertaining speakers on international political economy. His book’s probably very good, too, but even though he notes John Locke sees property as ours in common (“so what’s the problem?”), I suspect he fails to see there’s an even more fundamental mischief than credit bubbles. I may be wrong, because Blyth does perceive Gordon Brown’s economic “prudence” failed to quell to the UK real estate bubble.

“The world has been engorging itself on a credit binge”, says Blyth; however, managed austerity has brought nations more, rather than less, debt. Austerity was introduced only to save the banks, and pensioners have been conscripted into this “Golden Dawn” in the misbelief that “there’s a free lunch if you skip your dinner.”

Blyth’s talk, replayed on Radio National’s “Big Ideas” last night, unlike the budget, is a must listen.