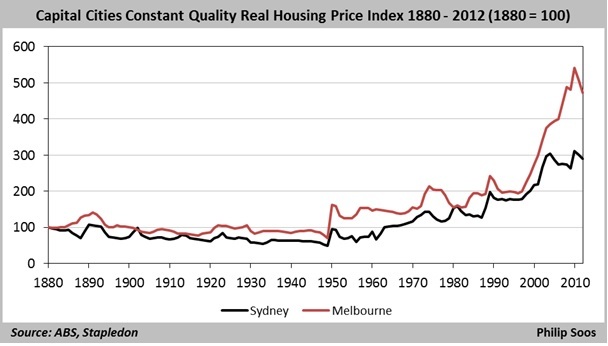 Greater Sydney’s higher population and traditional physical constraints have tended to set its residential prices higher than Melbourne’s, although the gap has recently narrowed.

Sydney’s prices moderated several years ago during the current residential bubble, but Melbourne’s kept on escalating. Only in the last year or two have we seen residential prices slacken off in Melbourne.

Melbourne has a history of outdoing Sydney at the rate of increase off this lower base during boom and bubble periods, however.

The point is demonstrated in the above chart by Melbourne analyst, Philip Soos, who has recently compiled Australia’s most comprehensive data set on real estate prices.

Constant quality real housing price indices for Melbourne and Sydney allow us to make the Melbourne-Sydney comparison, from the 1880s boom (documented in Michael Canon’s “The Land Boomers”) to the starker differences during the current bubble (which is likely to spawn many post hoc books).

The slight downturn from Melbourne’s current peak suggests this may not be the time to buy in Melbourne.

Although Richard Cobden and John Bright had demonstrated to the British people’s satisfaction that the Corn Laws, and protectionist policies in general, only act to keep prices very high, particularly landlord’s, and Sydney accepted this free trade argument, Melbourne historically adopted a protectionist stance under the influence of David Syme at THE AGE.

And the banks were always happy to be headquartered in Melbourne which seemed a little more alert than Sydney to the lurks, perks and blandishments of finance and real estate. If land prices were about to skyrocket, Melbourne would be there in spades; production and manufacturing could come second.

That’s what people fail to realise: there IS a definite tension between productivity and real estate speculation. This is more readily visible at this point across the USA and Europe, but the Australian denouement proceeds apace.