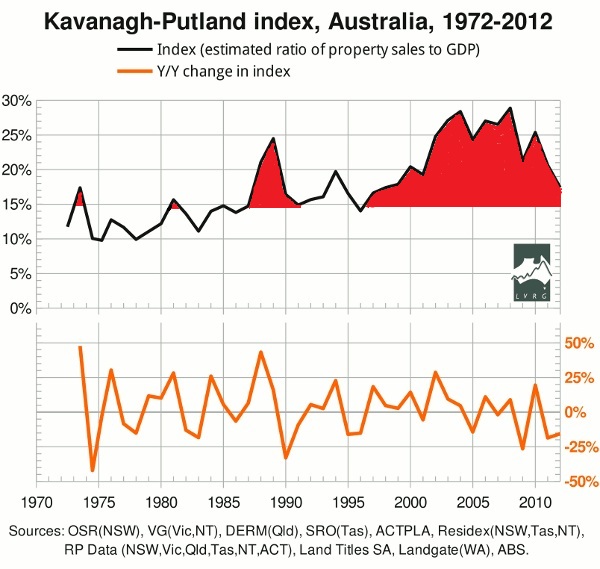 Once you understand the importance and centrality of land to the economy, the above index provides unique insights.

The three areas coloured red on the top line of the chart in 1973, 1981 and 1988/89 represent real estate bubbles. Each was followed by an economic recession when the bubble burst. You will see the fourth red bubble dwarfs the earlier three by an enormous degree of magnitude.

It should be noted the 1994 real estate peak was not a national bubble because it actually included the final bank sell-off of major commercial and industrial distressed properties from the late ’80s-early ’90s bubble.  It also included a booming real estate market in Queensland which was out of kilter with the rest of Australia (and for which Queensland, along with South-East Asia, paid the penalty in 2007.)

Many consider Australia has avoided the worst of the global financial collapse and that the extended bubble we’ve experienced since the late 1990s won’t also burst. This hopeful scenario is along much the same lines as the great American economist Irving Fisher who is unfortunately best remembered for a great mistake, when he announced just before the Wall Street collapse in 1929 that the stock market had reached “a permanently high plateau”.

The purpose of this website is to deliver the good news that a fiscal remedy to bring a quick turnaround from financial collapse IS available. Unfortunately, the US and Europe haven’t been allowed to discover it yet.