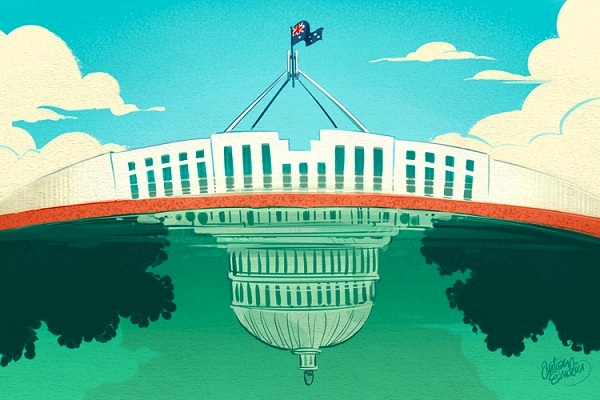 They’re off and running. First, there’s the now weirdly-named Liberal Party which has morphed into populist hard-right conservatism to such an extent the misnomer is an affront to any sensible person.

They’re the hot favourite to win the government of Australia on 14 September.  Without some catastrophe happening to the Liberals, the Labor government’s gone.

On the other hand, despite its parliamentary representatives’ and adherents’ protestations to the contrary, the Labor Party’s “light on the hill” has been extinguished.

At least the hard-right Tories–against any societal change at all unless it favours the 1% because “they know how to run the economy”–understand what they represent. Labor, however, having also sold out to the 1% by its actions, if not its lingering high-minded words, no longer knows for what it stands, and much of the party’s diminishing membership resents its loss of direction.  The diehards know they’re now useful only to hand out how-to-vote cards on election day but stick to the party, dreaming it may return to its roots.

Is this too severe a critique of the Labor Party? Not at all.

When Prime Minister Kevin Rudd, dared to institute an all-in 40% tax on miners’ super-profits for the Australian people, which accorded with Labor Party principles, he was unceremoniously dumped by his colleagues. They’ve been unable to explain knifing Rudd in the back except in terms of his having been “non-consultative” and “too remote” from his fellows. The real story was Labor moving further rightward towards the requirements of the 1% and its rampant FIRE sector.

Enter new Prime Minister Julia Gillard to conduct a backroom deal with a handful of big miners. This reversed Kevin Rudd’s application of one of the key pillar’s of the Henry Tax Review’s proposed tax-shift off labour and capital, reducing the tens of billions in rent the miners would properly have had to pay to the Australian people by way of rent to a peppercorn rent yielding instead only tens of millions. (See THE AGE editorial 16 February)

Meanwhile, as businesses begin to tank, the revenue base has rapidly declined. The Labor Party is nowhere on the revenue conundrum whilst the Liberal Party’s response is to slash 24,000 jobs in Canberra. Sans Kevin Rudd, Ken Henry’s workable tax-shift is now ignored by both parties.

Incredibly, most Australians cling like limpets to one of these two sell-out political parties. Some, not liking the smaller parties or independents, will vote for them out of a sense of resignation for what they once stood.

Australia, you’re in for a lot of bluster and BS over the next six months. These two parties are no longer located at different ends of the political spectrum. They are the yin and yang of the 1%.

Where are the economic policies that might avoid the approaching depression?  Missing.

Both parties offer their version of status quo.

All is division and populism: the pollsters rule.

Though the charade is no longer enjoyable, I’ll continue to commentate by way of catharsis.

One thought on “THE CAMPAIGN FOR AUSTRALIA’S S14 ELECTION”