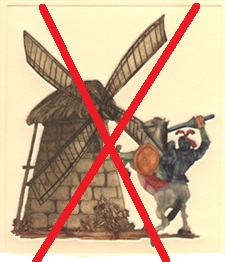 Many great personalities, including Leo Tolstoy,* have noted the case for a Georgist economy is unanswerable, and arguments put against it are either based upon ignorance of what Henry George actually said or otherwise fallacious.

So, if the case for the public capture of land and resource rents is logical, and Georgists are not simply tilting at windmills, why have countries suffering so badly under the deadweight of taxation failed to put it into practice?

The only possible answer is that political power has so far been able to defeat reason on the issue – and this comes through in a resigned fashion in discussion with intelligent people:

“Oh, the argument is fine, but powerful vested interests will resist it!”

“It’s impossible to break through the existing mindset.”

“It’s a big issue, and people can’t accept such far-reaching change, even if it does correct many of the ills we face today.”

Of course, this tragic situation has parallels. Just as an enormous taxation industry now feeds off an economic system tailored to the whims of the big rent-seekers in banking, mining and real estate (the 0.01%) the pharmaceutical industry feeds off illnesses and ailments we may not experience had we taken greater care of our diet and exercise.

The big difference is the pharmaceutical industry won’t tell you a good dietary regime and healthy exercise is bad for you.

So, the question becomes: How do we tackle the wealthy corporate entities who steal the public’s resource rents, in order that we may free ourselves from the parasite which not only preys upon our personal wealth and health but also drives nations into the depression and penury we’re witnessing?

It’s a riddle we need to solve urgently, because the usual rotation from this point is: currency wars; trade wars; world war.

* “People do not argue with the teachings of George, they simply do not know it. … He who becomes acquainted with it cannot but agree.”  – Leo Tolstoy

2 thoughts on “NOT TILTING AT WINDMILLS”