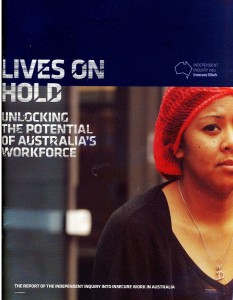 I’ve been catching up on a bit of reading.  This included taking a peep at what the Independent Inquiry into Insecure Work’s Lives on Hold: Unlocking the Potential of Australia’s Workforce has come up with.

The inquiry was chaired by Brian Howe, AO, Deputy Prime Minister of Australia from 1991 to 1995 and commissioned by the Australian Council of Trade Unions to consider the extent, causes, and effects of the growth of insecure work. I had made a brief submission.

Seems further regulation will do the trick.

We also need “A broader focus on work-life transitions, rather than the narrow preoccupation between employment and unemployment that has led to an emphasis on Welfare-to-Work initiatives.”

I trust the commitment to lifelong learning for which the report also calls doesn’t mean learning that sort of language!

The necessary reform to Australia’s tax and transfer system is apparently to address the inadequacy of the Newstart Allowance, simplifying income declaration systems and abolishing the Liquid Assets waiting period – all essential changes, I’m sure.

But that’s about it. What a letdown!

We are provided with figures on the extent of casualisation of the workforce, and follow what has driven work insecurity to crisis levels.

Not once, however, is it observed that increasing capture of publicly-generated land and natural resource rent by the 0.1% over the last forty years has forced more taxation onto the earned incomes of workers: nor that the superannuation guarantee effectively becomes yet another deduction from salary packages of poorer workers. Wouldn’t they love to have that money now!

But surely salary costs, existing regulations and declining profits make new employees a risky proposition for business, too? Couldn’t this be why some employers are forced into considering increased casualisation? No?

The report’s personal case studies bring examples of poor work practices and work insecurity to life, but it neglects to see that much business is also doing it tough, and that’s because rentier barons are ripping businesses off just as surely as they’re ripping off workers.

The report fails to identify big banks and billionaire miners as plunderers of our land and natural resource rents, working rorts on workers and employers alike.

I came to my own conclusion: that putting forward proposals that respond to adverse outcomes will never replace abolishing them.

Unfortunately, this is ACTU inquiry has provided just another “Ambulance in the Valley” report.