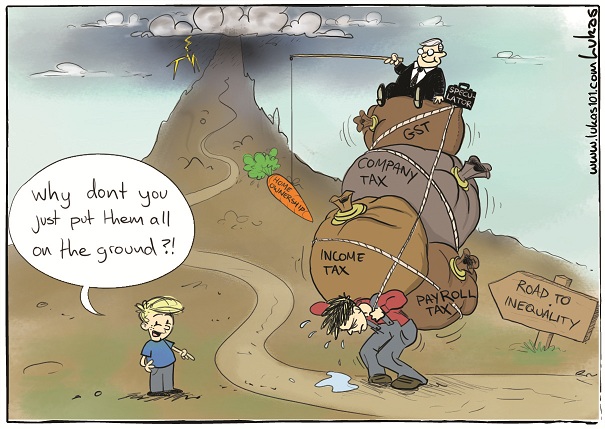 ONCE you’ve seen land and natural resource rents are kept purposely invisible by The Powers That Be (TPTB) so they may capture them unto themselves, you’ve pinpointed the greatest corruption of all.

It explains the existence of billionaires and paupers, of want and decadence, of high prices and of poverty-based crime.

Arbitrarily-imposed taxation becomes the natural corollary of the failure to collect the economic rent of land and natural resources to the public purse.

And, of course, TPTB take pains to badmouth land-based revenues:-

“Shocking!  A man’s home is his castle!”

“Taxes on land!  What about the poor widow with no income?”

They’re far less solicitous about all the indirect taxes the poor widow is obliged to bear, or about those taxes fining the earned incomes of labour and capital.

TPTB are the rentier class, you see. Without much success, some of us even try to emulate them.

It’s instructive that whereas the humble English labourer with a family of five in the 15th century and first quarter of the 16th century was able to save two-thirds of his wages after food, clothing and shelter, by the 21st century he had become a debt-slave.

It might be noted that taxes were virtually non-existent and land rents were captured for revenue in the 15th and first part of the 16th centuries.

So, we now look to government to solve all the corruptions that flow from not getting revenue from its proper source.

One of many such ‘solutions’ is Australia’s compulsory superannuation.  People are found singing its praises because it hangs well-intentioned additions off our failed tax edifice.

Silently, this remains the greatest corruption of all.