Our council tax epitomises the political cowardice of successive governments. Will George Osborne be braver? 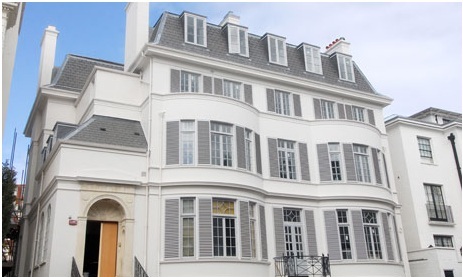 Billed as London’s most expensive house, this Kensington property sold for £80m in 2008. There are many empty ‘offshore’ mansions in the capital. Photo: Ray Tang/Rex

George Osborne has the right instinct on tax. Get some sanity into child and housing benefit, relieve taxes at the bottom and, at the top, tax wealth rather than income. If so, there is no time like the present. The chancellor should drop the unloved 50% band of income tax and go for property. Housing is the most inefficient, mal-distributed, under-taxed and therefore overpriced asset in the land. Tax it properly, with something in return.

Britons live more lavishly than any other big nation in Europe. More live in houses not flats, more have private gardens and more are home owners not renters. They also pay the lowest local taxes. What they do pay is a cockeyed, regressive, un-buoyant council tax, based on property valuations that bear little relation to actual or differential price. The top H band of council tax in the richer parts of the south-east embraces almost half of home owners. It is, in effect, a poll tax.

Year after year the last Labour government funked revaluing England’s council tax bands, meekly fearing that losers might howl louder than winners. The Welsh were bolder, revaluing in 2005 and now getting the benefit. Council tax on an I-band house in Gwynedd is higher than on a sheikh’s palace in Kensington (£2,870 against £2,158).

The Liberal Democrat answer is Vince Cable’s £2m mansion tax, an impost with built-in political impossibility. It is swingeing, posited at £20,000 a year per mansion. It has a blatant cliff-edge effect, excusing houses just below the threshold yet savaging those above it. It evokes the “granny tax” protest, lacks regional variation and is merely a top-down fiscal wheeze to avoid the odium of rate revaluation.

Meanwhile council tax remains the fiscal Cinderella, a miserable drudge of a thing, abused, beaten and kept in the localist broom cupboard. It was conjured into being by John Major’s government in 1992 to purge the Tories of the stain of poll tax, while somehow pretending it was not a reversion to the rates.

Council tax is unfair. Whereas under rates, the ratio of lowest to highest house valuation was roughly 1:100, the spread of the eight council tax bands is merely 1:3. The highest H band was £320,000 at 1991 prices (up to an average of £950,000 today). The bands have never been adjusted, while a growing sense of unfairness leads all governments to curry electoral favour by “freezing” council tax in favour of stealth taxes. The whole saga epitomises Britain’s political cowardice.

Osborne should follow gutsy Wales and introduce new upper bands that reflect the rise in house prices since the 1990s. He could do it now. Only the existing H band would need revaluing, and could be graduated in three stages to whatever value he chooses. The actual tax paid per band would still be determined by local councils. The allocation of properties to the new bands by currently under-employed estate agents would be no big deal. It must anyway be undertaken one day.

Property is the easiest of all assets to tax because it the most visible, most recordable and most unavoidable. The private housing lobby is already hollering about losers, crying that any new top bands will “unfairly target the income-poor and equity-rich”. This is like worrying about people who own Rolls-Royces they cannot afford to drive.

The genteel poor may use inherited property inefficiently, but there is no reason for not taxing them for doing so. I cannot plead to be excused taxes because I get little benefit from them. The government is now proposing to “tax” housing benefit to reflect the number of rooms recipients leave unoccupied, and to discourage them from living in expensive properties. Taxing the living space of the rich is hardly unfair.

Another group of much-bewailed losers is foreigners, many of whom pay neither taxes nor stamp duty. They can lump it. On one estimate, some 100,000 UK properties are now parked in offshore tax havens, which must comprise the bulk of the 155,000 houses in England and Wales thought to be worth more than £1m. Why Gordon Brown left in place this massive tax loophole, costing some £1bn a year, is a mystery.

Nor are Britain’s property taxes particularly high. New York’s are fixed at between 1% and 2% of value. Westchester County’s median property tax is $8,474, roughly three times the top rate in London’s Kensington. Many New Yorkers pay $20,000 to $30,000. These can be partly offset against other taxes, but taxes they remain.

There is another reason for raising taxes on property across the board. The biggest unexploited – and “greenest” – housing resource in Britain is empty and under-occupied property. There are empty rooms over shops, frozen by planning control. There are empty “offshore” mansions in central London. There are low plot ratios under urban renewal and more vacant commercial sites than ever. Britain is wasteful of residential land. An estimated million vacant homes are said to lie hidden within the urban and suburban landscape of Britain. Osborne is right to regard planning as one inhibitor of bringing them into use. Tax relief on residential lets would also help.

The key here is to use the tax system as an aid to urban growth, properly so called. City sprawl is now a Europe-wide problem, with car-intensive building in the countryside increasing by 20% since 1980 to meet a population rise of just 6%. It may be impossible for a free market to “monetise” the value of open country for leisure and recreation, but it obviously makes sense to direct taxes at ensuring developed land is used more efficiently. We should tax its extravagant use and relieve taxes for public benefit.

There is no denying the political price in progressive property taxes. The rich will pay more. But that price could be balanced by abandoning the 50p income tax band, which history suggests will raise little extra money. The net increase in revenue from council tax could then be diverted to the Liberal Democrat goal of a higher basic tax threshold. Each of these fiscal changes should yield pleasure somewhere on the political spectrum, while also delivering the chancellor a possible rise in overall revenue.

Those who champion fiscal reform get precious few moments on stage. They no sooner start their song than they are deafened by cries of political expediency. This time the politics could just be in their favour. Might someone listen?