Alan Joyce’s lockout of Qantas staff last weekend bore out my recent fulminations in The Third Way: Why Businesses and Unions are Both Wrong, that IR trouble is about to break out in a big way.

Wage and salary earners continue to lose ground in an increasingly difficult economy, but employers’ margins are feeling the pinch, too. How is the impasse to be resolved?

In the overly simplistic Labour v. Capital model we practise, Alan Joyce considers he has no choice but to chase cheaper labour for Qantas in Asia if he is to resurrect the international fortunes of the airline: he must put an end to the unions slowly finishing off what increasingly resembles a carcass.

Naturally, the unions disagree. They claim Joyce and the company have overreacted to their campaign for wage justice and the need to maintain Qantas employment in Australia.

So, IR is reduced, as always, to cheap labour v. wage justice.

However, where the usual resolution of this situation is for companies simply to go offshore, let me proffer an infinitely better solution.

It is not only wages that are cheaper across Asia and South-East Asia. The prices of their products and services are cheaper because their  taxation and land inputs are also vastly less than ours. We not only fine labour and capital more for producing, but our small population of only 23 million souls has the dearest land in the world, therefore, the dearest land inputs in our cost of production.

How may Australia reduce its land and tax inputs in order to become more cost competitive?

For starters, we could look to the findings of Ken Henry’s inquiry into our incredibly pernicious tax regime. We should abolish all the taxes he recommends should be abolished, and put greater emphasis on capturing the economic rents of our land and natural resources as his panel advised.

The chart below clearly shows that labour and capital should NOT be fighting each other for what is left of the returns to labour and capital after the taxman and the rentier class have had their way with us. Wage earners and employers have common cause in reducing their taxation by abolishing as many taxes as practicable, as recommended by Ken Henry, and replacing these with the publicly-generated land rents currently captured by banks and other rent-seekers.

Interestingly, the same solution was once applied by Sir Thomas Stamford Raffles in what is now known as Indonesia. Raffles went on to found Singapore on the same principles.

In fact, the only real stumbling blocks are (a) politicians and (b) rent-seekers. Do we have the wit and energy to overcome them, if we want workable revenue and IR systems?  Probably not?

C’mon guys!  Let’s pull our fingers out and implement the Henry Review! The times call for it as an essential reform! 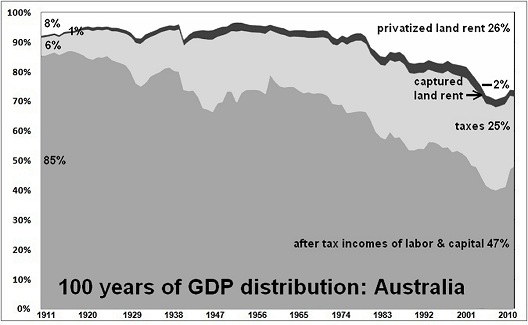 1.   Australia has the most profitable banks in the world – because we have the highest land prices in the world.

2. Australia manufactures less and less, because our taxes on productivity and our exceptionally high land prices (the latter of which are about to self-correct) give all the wrong signals.

3.  Despite our politicians and rent-seekers, we CAN do something about this incredible corruption and stupidity. 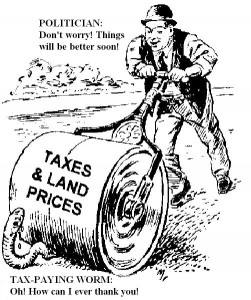