I’m no fan of economists who are able to equate the rent flowing from land with the returns to manufactured capital without experiencing a frisson of self-reproach. That income from land (or ‘nature’) must be distinguished from that of capital because it has not been earned is disputed by the frisson-free, of course.

Nor does my training as a valuer of real estate allow me to see escalating land prices simply as a function of undersupply, excessive demand, zoning controls, population increase, or some combination of these influences. The primary factor will always be the extent to which land rent is permitted to remain the property of individuals or groups, because land price is first and foremost the manifest private capitalization of its publicly-generated rent. I draw this conclusion from fact, without invoking the Bible of Christian and Jew to enjoin Leviticus 25:23 or Ecclesiastes 5:9, and with more than a little help from Sir William Petty, Adam Smith, David Ricardo and Henry George.

And I trust I may be forgiven when I demur from conventional economic wisdom of keeping separate the losses brought about by escalating land prices, recession and unemployment from the excess burdens of taxation? As a valuer, I’ve not been given the power granted economists to divorce these ills from a marriage which generates repetitive land price bubbles, economic recession, unemployment and myriad accompanying social pathologies – so I leave them conjoined in their unholy alliance.

These declamations out of the way, let me attempt to assess the real excess burden of Australian land price bubbles and taxation from 1972 until 2006. I’ll leave it to others to update these findings to current date.

Whereas studies show the capture of the income from land (the common wealth?) carries little or no deadweight—because it’s in the nature of a rent which can’t be passed on in prices—arbitrary penalty taxes and land prices certainly do apply their excess burdens. Indeed, both fracture economies and civil society. Evidence? Maybe the state of world’s economies will attest?

In Unlocking the Riches of Oz: A case study of the social costs of real estate bubbles 1972 to 2006 (2007) I suggested world property markets were about to experience a crash, and that the Australian recessions of 1974-75, 1982-83 and 1991-92 followed immediately on the heels of the bursting of land price bubbles in 1973, 1981 and 1988-89 respectively. I argued “elimination of bubbles also implies elimination of cycles, and therefore of the retrogression in growth that occurs during each too-politely named ‘business cycle’. Therefore, if we start with Australian GDP for the financial year ending 1972, expressed in 2006 prices, and assume that the highest real year-on-year GDP growth figure achieved since then had applied in every year, GDP for the 2006 financial year would have been a staggering $1.98 trillion, that is, more than $1 trillion higher than it actually reached.”

I held that to capture at least half the economic rent of land would have obviated Australian land price bubble-induced recessions if it were to replace some of the deadweight of existing taxes. But isn’t adopting the highest year-on-year growth of 5.53% during that 34-year period a bit of a stretch?  Not at all! The effect of introducing a land rent regime is to reduce land prices immediately and, thereafter, the levels of mortgages and private debt. This would stimulate and smooth demand over the term, and economic activity would increase accordingly. Whilst land prices would decrease, the reward to earned incomes must increase, and the upsurge in prosperity would act to increase the land rent revenue base. I claim the 5.53% smoothed economic growth adopted from 1972 to 2006, sans land price bubbles and their recessions, would be found to be both eminently attainable and conservative.

Here are the sums:- 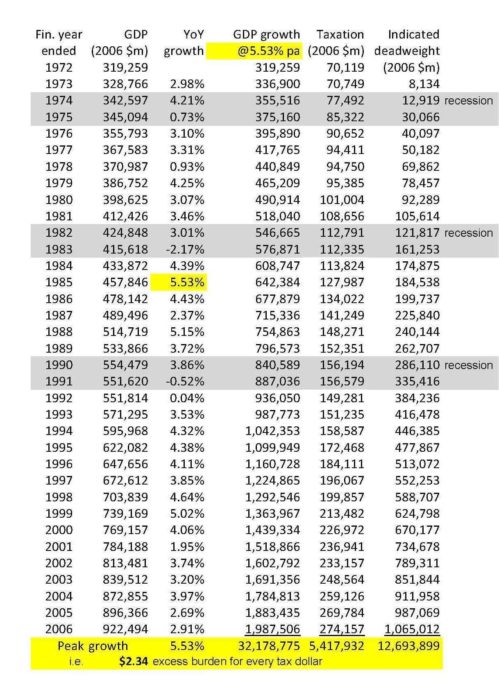 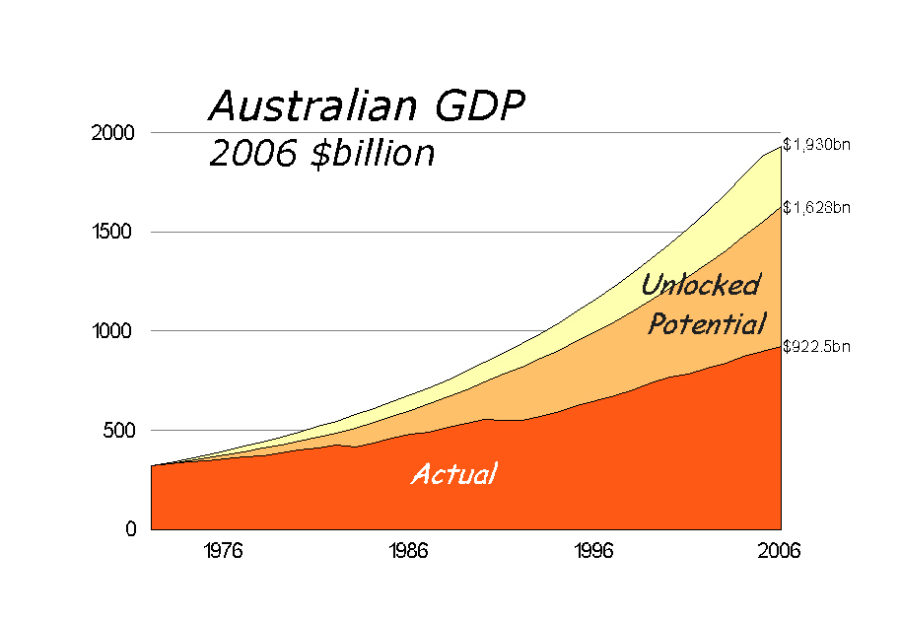 That my overarching approach to excess burden is conservative rather than excessive is supported by Harvard’s Martin Feldstein who found multiples in excess of 2.0 that related only to the deleterious effects of income taxes in his mathematical modelling. Feldstein corrected miserable findings of a fraction of 1.0 by Arnold Harberger, Chicago’s (and Pinochet’s) tax expert.

So, if every dollar of tax levied on labour and capital over the period 1972 to 2006 cost at least $2.34 in recessional and unemployment deadweight, in inadequate health and educational deadweight, in underinvestment in infrastructure and social services deadweight, would it be out of place for Australians to consider re-introducing the federal land ‘tax’ we had from 1910 to 1952 as recommended by the Henry Tax Review? As nations begin to elect troglodytes as saviours, perhaps we should consider whether $0 damage v . $2.34 devastation for every dollar of tax raised is worthy of some thought in economic and political circles.

People from philosopher John Locke to economist Mason Gaffney have shown all revenues ultimately derive from society’s surplus (economic rent) anyway. Why don’t we get it from that source in the first instance? We ought to be discovering by now that only the 0.1% is advantaged by self-defeating taxes which apply an excess burden of $2.34 onto we plebeians?  Eh, Thomas Piketty? Eh, Yanis Varoufakis?

Most economists manage to ignore the real excess burden of taxation and escalating land prices. This has seen wage levels stagnate or decline across the world as the 0.1% (including banks, CEOs and other aspirants) mercilessly rip public rent out of the economy. The only political alternative to addressing all the deadweight seems to be to seek to drive wages down even further. Although this is literally counterproductive, it continues daily to win adherents and send world economies further down the gurgler.

This article first appeared on 1 March 2017 on  Fred Harrison‘s website  at http://www.sharetherents.org/real-excess-burden-overarching-approach/

Bryan Kavanagh was employed in the Australian Taxation Office and the Commonwealth Bank of Australia as a real estate valuer before co-founding a private real estate valuation practice in Melbourne in 1997.  His blogs may be read at https://thedepression.org.au/