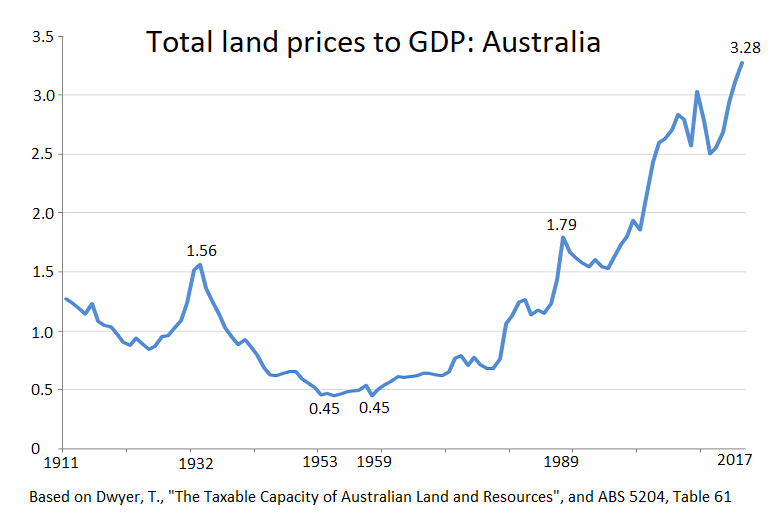 We’re at a watershed. Real estate is tanking again and our politicians are going to bail out the banks, instead of bailing out mortgagors.

A banking Ponzi continues to be worked on the Australian people, and the Royal Commission into misconduct in the banking, superannuation and financial services industry was specifically precluded from investigating the macroeconomics of bank lending.

Curious? Not really. The Royal Commission might discover the need to reintegrate the theory of valuation back into economics and bank lending, and that would expose bank Ponzi-lending.

So, as land has no cost of production, its price is not determined by supply and demand, but by two things only:  how little the government taxes it, and to what extent banks are prepared to advance credit against it.

So, not only are our incomes reduced by taxes, but prices also increase, especially the price of land which has increased at a much greater rate than GDP. So if taxes represent a burden of twice the amount levied, we can add land prices to that, because an inadequate amount of land rent has been taxed away! Centuries ago, John Locke concluded this was crazy situation.

Adam Smith, David Ricardo, John Stuart Mill, Tom Paine and Henry George, too, said land rent needed to be taxed away in order to curb monopoly, and, as banking advances excessive credit against land prices, it has become the greatest of all monopolies. Banking generates bubbles in land prices which burst into recessions every 18 years – then the banks get bailed out! This is a Ponzi Scheme, pure and simple – and it’s about to happen again!

And, as Australia avoided a recession in 2008, this is going to be a real baddie!

But nothing must be said publicly about this banking Ponzi. It’s the one Ponzi we must respect.