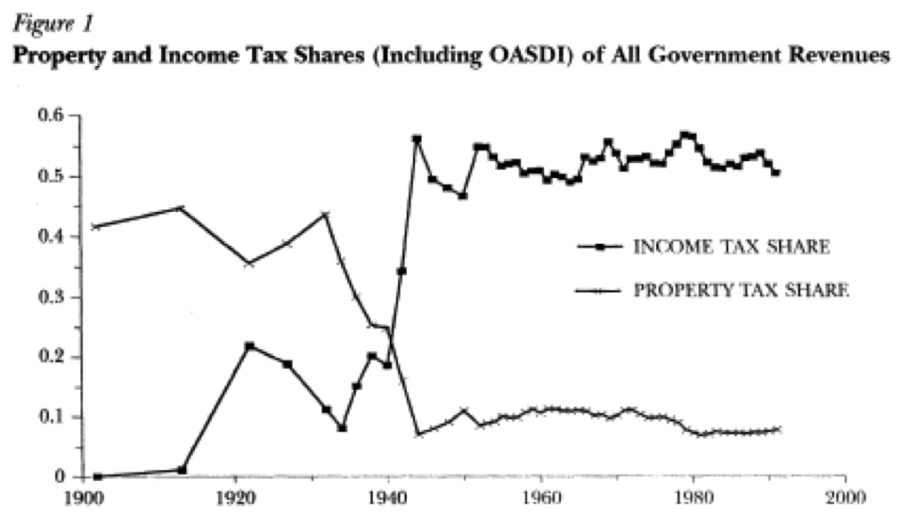 Wallis’ paper is well researched and engaging. I’d recommend a read by those who’ve come to see the federal income tax as the natural state of things – and this may very well include the writer himself. Remarkably, Wallis regards the reason for the rise of personal and corporate income taxes to have been “the most active level of government was the one with the access to the lowest cost revenue source.” With much reason and support, property tax aficionados will dispute this conclusion.

Although Wallis doesn’t regale us with the achievements of the property tax, particularly during what became known as the Progressive Era (1890s to 1920) when ‘single tax’ mayors progressed their cities to success and prosperity, Mason Gaffney does draw this history to our attention in his recommendations for a means of lifting New Orleans from the aftermath of Hurricane Katrina.

Of course, anybody who has followed this blog will know that I see the income and sales tax period as one of worsening economic failure. As income and sales taxes came to replace efficient and fair charges upon property values (so well depicted in Wallis’ Figure 1 above), the US has come to witness a series of larger and larger speculative bubbles (similar to those I’ve shown for Australia) which are relentlessly delivering us into another economic depression. (Interestingly, the introduction of Australia’s federal income tax was a WWII measure.)

“The Paradise Papers” prove once again that income tax remains largely voluntary for the super rich and, along with escalating land prices,  is driving wage earners into hopeless debt and penury.

There are well-meaning academics and policy-makers who believe we may remedy income and company tax avoidance.  We cannot.