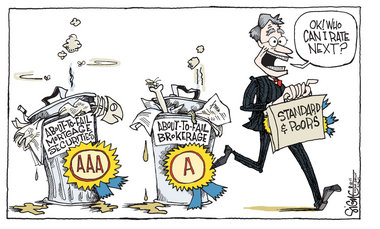 The rating agency Fitch, which like all the other rating agencies couldn’t even pick the global financial collapse, now says “the revolving door of Australian prime ministers” has more to do with personalities than economic policies.

All the polls showing the Abbott government would have got a trouncing at the next election are underpinned, as usually, by Australians’ knowledge that they are being done in their hip pockets.

Australians aren’t mugs.  Their hip pocket nerve has a habit of letting incumbent governments know their feelings when the economy is treating them badly.  That’s why governments lose elections.  Hockey’s first budget, and to a lesser extent the second, made the faltering Australian economy worse.

Sure, people were not happy with Tony Abbott, but they’re telling him he’s failing on his economics.  They can feel it in their pockets!

Unfortunately, Australians, are unable to take the next step yet.  They don’t know that it’s bubble land prices and taxes that are doing them in, and that many taxes need to be abolished – and that we need to capture a far greater proportion of our land rents if we are to reverse and remedy this sharp decline in our circumstances.

The rating agencies are being consistent: they still wouldn’t have a clue!