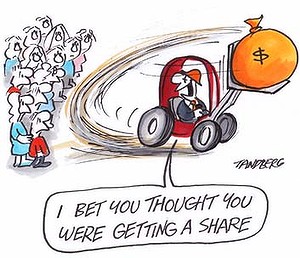 Yes, as you say Tony Abbott and Joe Hockey, we certainly do understand if this rotten budget isn’t passed taxes may have to be increased.

But you won’t acknowledge it’s about FROM WHERE we get our taxes, otherwise you wouldn’t be glorying in the fact that you’re abolishing the mining tax.  We NEED a mining tax guys, preferably like the original mining tax which would have brought mining in line with Australia’s non-controversial petroleum tax. Perhaps you might try to explain the difference between a resource rent on mining and one on petrol? Why shouldn’t we seek a fair return on both?

Maybe you’re acting as tools for those speculators in Australia’s land and natural resource rents who have got us into the impending economic devastation? Allowing them to hunker down during the crash?

I know the Labor alternative is also running scared of the Henry Tax Review recommendations fellas, but it would be nice if you’d stop giving Australia’s biggest rent-seekers a free ride whilst you seek to penalise business, workers and the poor.