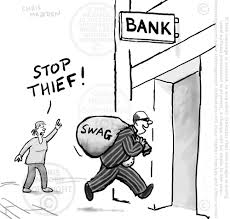 Banks provide credit – often too much credit. So much so that it can never be repaid. Michael Hudson puts it well: “Debt that can’t be repaid won’t be repaid.” That’s blunt, that’s succinct, and it’s correct.

How do banks provide too much credit? Isn’t that bad? To answer the second question first: Yes, it is bad.

But how do they do it? Well, they advance credit against real estate prices. Note I said “prices”, not “values”, because prices often get out of kilter with values in a real estate boom or bubble. You can see this when rental yields for real estate become swamped by capital price increases, returns dropping below 3% gross for example (which may represent a return of less than 2% net after outgoings).

But where once prudential banking practise used to discriminate between value and price in its risk management, it chooses no longer to do so.  In fact, by advancing credit into a real estate bubble, the banking hierarchy is well aware that it is fostering even higher land prices and, consequently, bigger mortgages and greater profits.

The downside of this risk management failure is twofold: 1) a correction in land prices will expose the financial system to the extent that property prices are now less than mortgages, and 2) increasing numbers of mortgages will become unpayable.

We are not used to land prices declining, but they do collapse at each recession or depression – sometimes for a considerable period.

In these circumstances, don’t banks have as much, if not more, responsibility for failed loans as do borrowers? Did they not fail their risk management test by continuing to lend extravagantly into a bubble?  (“Oh, so that’s why they always declare there is no bubble!”)

If banks are indeed at fault, why is it that people in Ireland, Greece, Spain, etc., are expected to bail out German banks, impoverishing themselves and their nations as unemployment rises? That’s surely a BIG penalty for failed loans in which banks were clearly complicit?

Of course, introducing an all-in land tax, which would permit counter-productive taxes to be abolished, could stop land prices from escalating. However, governments worldwide have not learnt this lesson. They continue to support errant banks at a great cost to their people. Banks matter. People don’t.  This is modern finance. This is modern economics.