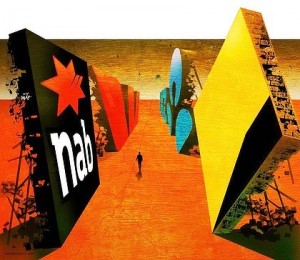 The first three letters in THE AGE today defend the banks.  The fourth from a person who doesn’t identify with the left of Australian politics is implicitly critical of the Reserve Bank for not lowering the cash rate from 4.25%.

Most banking people are undoubtedly good Australians, as I’m sure are the three bank defenders.

But we’ve got to look deeper if we are to see the terrible, terrible legacy with which the banks have left Australia – because we’re going to have to deal with it shortly.

This criticism goes more to what we and our governments ALLOW the banks to do to us, with which the first three letter writers are obviously unacquainted. It’s not good.  Therefore we, not the banks, are ultimately responsible for what is about to befall Australia.

No, we’re NOT different from the US and Europe which are on their knees. And I hear today that the UK which seems to have slipped under the European radar has pump-primed its economy to the tune of $500,000 billion. Half a trillion! That’s good?

So where did we and the banks go wrong?

Well, we’ve fallen for the pea and thimble trick with taxes. We’ve come to believe ‘the only certainties in life are death and taxes’, so taxes have to be paid for the necessary running of government.

But have you noticed how taxes have risen substantially as a proportion of GDP over the last hundred years? “That’s the price of the social contract’, do I hear you say?

What’s the alternative? Land and resource rents – because they DON’T destroy. They can’t be passed on in costs like taxes.

Oh, and sometimes we get this right.  I see we’re raising $3 billion from spectrum licenses.

Back to the point. As we capture only a tiny amount of our land rent for revenue, Australia has amongst the highest land prices in the world. I’ve dealt with the crappy, specious argument that our land prices are a matter of inadequate supply.

For which block of land would you pay less?

Now, as we do NOT capture enough land rent publicly, it’s privately capitalised into higher and higher land prices.

Banks lend on a combination of the depreciated value of a home plus the increasing value of the land.

This is wrong. Especially during a bubble in land prices.

Banks don’t care. They’re happy to fund you moving into your home – even during a residential bubble.  Their risk management goes out the door. It shouldn’t. In this respect, they are certainly at fault.

So, letters writers, although WE are also to blame for our ignorance in not capturing more of our land rent to keep land prices down, banks are NOT blameless.

I guess that’s why, despite its billions in profits, the ANZ bank has moved its mortgage interest rates up today. It’s provisioning for the forthcoming rout.

Maybe, but I’ll bet our BIG 4 will STILL end up putting their hands out for a bailout – because “they’re too big to fail”.

I want such a business! Rake in capitalised bubble-inflated land rent in 30 year mortgages in the good times, expect a handout from we the people in the bad.

We’ve got to remedy this sickness. It’s beyond time we discovered economic rent.

One thought on “WE, AND THE BANKS, ARE TO BLAME”