Economists are very strange people.  Some of them say private debt doesn’t matter much, because banks simply act as intermediaries between people in the community who lend to each other, so that any private debt cancels out.  More realistically, other economists say that banks, by generating excessive debt, are responsible for the repetitive economic recessions we experience.

However, even the latter economists fail to see that land price represents this ‘excessive debt’ directly and is, in fact, the generator of inflation, along with the taxation of labour and capital. All economists, even modern monetary theorists, consider that land price is simply the ‘market value’ of a particular piece of land under a house, when in fact it is the most fundamental economic pathology, the actual measure of an economy’s illness.

We’ve come a long way in the last 3300 years, but maybe the legendary Moses was a step ahead of today’s economists when he delivered God’s ritual and legal proscription against the baneful effects of land price? “The land must not be sold in perpetuity, for the land is mine and you are but strangers and sojourners with me.” (Leviticus 25:23)

Let’s take a peep at the welfare of the fifteenth century English labourer and carpenter (family of five), respectively, when the land rent was paid by the ‘owerners’ (Middle English derivation of ‘owner’) and when there was virtually no other taxation. 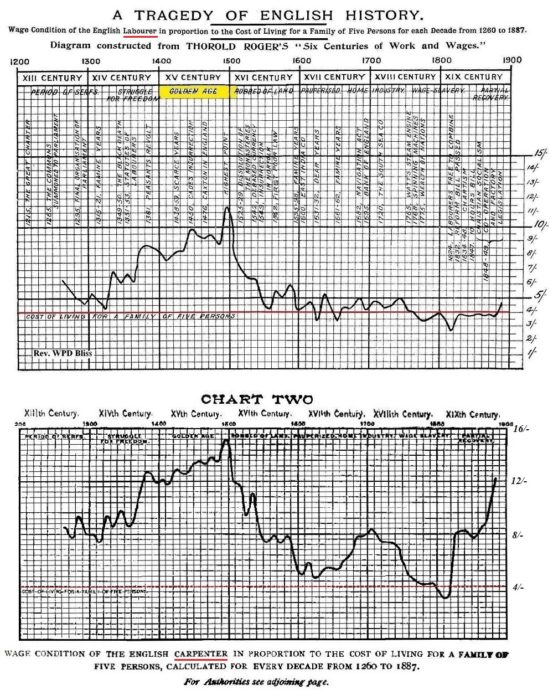 Wages are shown against the (red) cost of living line. The wage ‘bulge’ in the latter half of the fourteenth century is mainly explicable in terms of the Black Death, or plague, but this is not the case with the prosperous fifteenth century and first quarter of the sixteenth – up until Henry VIII’s enclosure and sales of the monastic lands. During that century, we can see the labourer and, particularly, the skilled carpenter, had much of their wages left after food, clothing and shelter. Can we say this today, when these people are more commonly in debt?  It is more than arguable that land price, which was unknown until the time of Henry VIII, explains this retrogression in peoples’ fortunes.

Now, let’s look at Australia today to compare growth in Australia’s total land price (ABS 5204.61) against its economic growth (GDP at current prices).  Unlike in the past where there has been some relativity between land price and GDP increases, where GDP has trebled in the last 20 years, land prices have increased 5.5 times! Would anyone suggest that this land price growth represents productivity, that is, growth in real wealth? 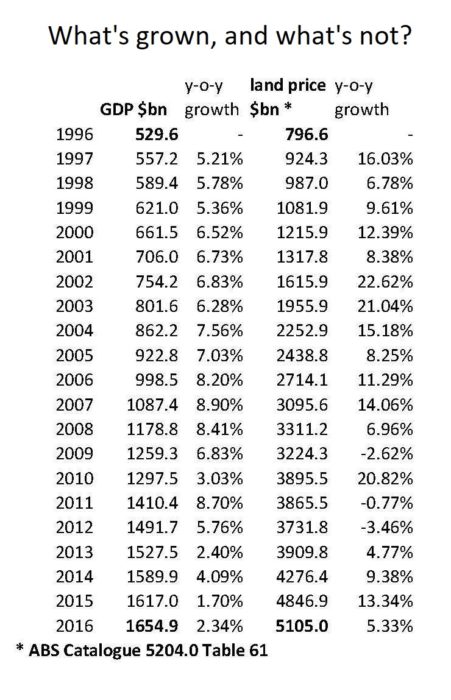 What if I were to suggest that banks setting up mortgages against much of this detrimental growth in land prices actually explains Australia’s declining economic performance?

What if the American economist/social philosopher Henry George was correct that incomes and profits rise and fall together, inversely to land prices (i.e. inversely to the private capitalisation of uncaptured land rent)?  He, Adam Smith, John Stuart Mill and, more recently, Joseph Stiglitz said land rent should be captured to the public purse. But that would mean there’d be little or nothing left which could be capitalised into a land price?

That’s correct!  And banking and real estate would not be able to make ‘super-profits’ out of land prices!  And with a brake applied to rent-seeking in land price, wages and profits must increase and private debt must decline!

What’s wrong with that, all you economists out there?  So, let it slowly sink into your heads that land price and the taxation of labour and capital are the cause of inflation and debt – and the enemies of national prosperity.