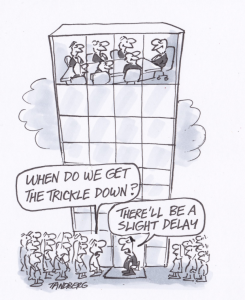 Time seems to have caught up with the Institute of Public Affairs (IPA). It still believes in the wonders of trickle down economics, and the sort of ‘freedoms’ proclaimed by Ayn Rand, Margaret Thatcher and Ronald Reagan that delivered the world into the privileged rentier economy Australia has come to experience: an unimpeded rent-seeking that continues to proclaim and pay lip service to productivity but honours it in the breach.

Real freedom entails cheap access to land for the young, and un-taxing both wages and profits, but the IPA won’t have a bar of it.  By not recognising the failure of the far right, the IPA has become unrepentantly tied to the ideology of its financial benefactors.

The IPA and the extreme right wing of the Liberal Party are driving the self-same wedge that fractured US conservatism. People began to see an ideology that puts rent-seeking front and centre as being too extreme.